When Christian Eriksen returned to training after his cardiac arrest at last year’s European Championship, it was with one main goal in mind.

“I think one of the first conversations I had with the doctor … was about it being my goal to play in the World Cup if everything went well,” Eriksen told the FIFA website in a recent interview. “That was the dream at the time.”

Not many who watched Eriksen being surrounded by paramedics and teammates as he lay lifeless on the field at Parken Stadium in Copenhagen would have viewed that dream as realistic.

But Eriksen is again set to be a key part of Denmark’s team in Qatar, less than 18 months after medics used a defibrillator to restart his heart as a horrified nation — and much of the football world — watched on.

It will be the next step of a remarkable comeback that has already seen Eriksen return to elite football, first with Brentford and then Manchester United — showing he is still among the world’s best playmakers.

He made his national team comeback in March, scoring two minutes after coming on a substitute in a 4-2 loss to the Netherlands. He also netted with a 25-yard shot against Croatia in the Nations League in September.

“I feel on top and comfortable,” Eriksen told Danish media during last month’s international break. “There is really nothing that can stand in my way.”

A TEAM TO WATCH

While Eriksen is Denmark’s best player, he is far from the only reason to pay attention to the only Scandinavian team at the World Cup. His ordeal at Euro 2020 only seemed to make Denmark stronger as a team as his teammates bonded together as an even closer-knit group in the aftermath.

Denmark reached the semifinals at the tournament before losing to England, and then completed a near-perfect qualifying campaign for the World Cup — winning its first nine games to secure a spot in Qatar before losing the 10th and final match. 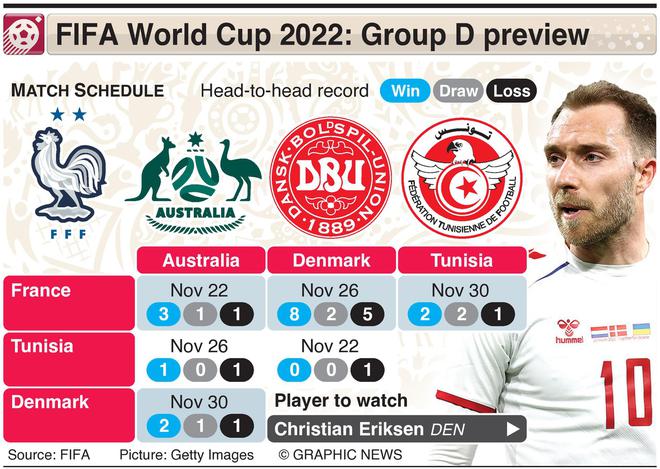 “I think this team has the potential to reach another level,” Denmark coach Kasper Hjulmand said. “When I think back to that Euro semifinal against England at Wembley, for example, we know we can play a lot better than we did that day.”

“If we can play at that level again, we also have a good chance of getting a good result for the World Cup,” Eriksen said after the victory over France.

The Danes will play France again in Qatar, as well as Australia and Tunisia in Group D.

Denmark conceded only one goal in its first nine World Cup qualifiers, highlighting the strength of a defense that is anchored by veteran goalkeeper Kasper Schmeichel, captain Simon Kjaer and fellow center back Andreas Christensen. Tottenham’s Pierre-Emile Hojbjerg adds another focal point to midfield while 22-year-old winger Mikkel Damsgaard is viewed as a star in the making. The only question is where the goals are going to come from. Fullback Joakim Maehle was Denmark’s co-top scorer in qualifying with five goals, while regular striker Yussuf Poulsen only had one.

When and where is Denmark playing in the world cup?

Where can I watch Denmark’s matches in the FIFA World Cup 2022?

Where can I live stream Denmark’s matches in the FIFA World Cup 2022?