Leading up to the 2022 FIFA World Cup, which begins on November 20, this series will take you through 25 controversies across the previous 21 editions.

British referee Graham Poll was the official for the Australia versus Croatia 2006 World Cup first round group match.

With the match heading for a 2-2 draw, things became slightly ugly towards the end when Croatian Josip Simunic committed a second bookable offence. However, instead of automatic send off, Simunic remained on the field and was red-carded only after the final whistle when he was found guilty of dissent, his “third yellow”.

Poll and his assistants did not officiate another game in that edition. 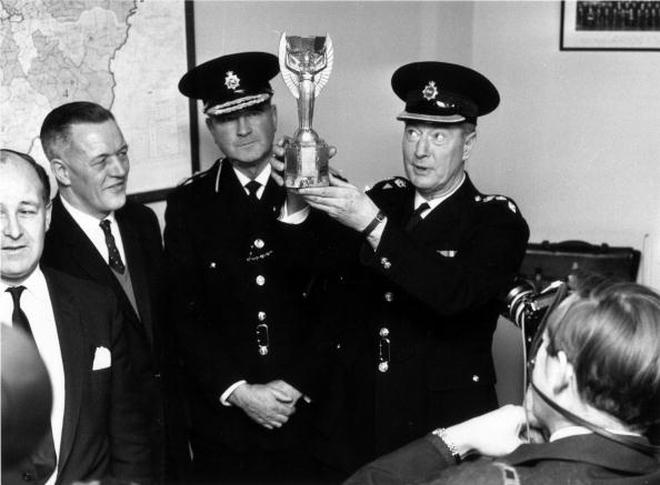 The first trophy given out to World Cup winner, from 1930 to 1970, was the Jules Rimet trophy. Named after the then Fifa President, the original trophy survived the Great Depression and two World Wars. The 14-inch-high statuette showed the Greek Goddess of victory, Nike, holding up a bowl, and was called ‘Victory’.

However, months before the 1966 edition, the trophy was stolen from an exhibition. It was found later that month, underneath a garden hedge, wrapped in newspaper, by a dog named Pickles. The ball slithers into the net off a shot by Leopoldo Luque of Argentina and Peru’s goalkeeper Ramon Quiroga looks back in anguish. The home team won by a huge margin of 6-0.
| Photo Credit: THE HINDU ARCHIVES

Argentina in 1978 wasn’t a fun place to be for pro­democracy, free­speech support­ers. The military junta in power there was happily rounding up people and making liberal upstarts go missing when the World Cup ar­rived in the middle of the year.

With already a slew of players pulling out because of political differences, the tour­nament was marred by further corruption charges as Peru went down rather ingloriously to Argentina in its last league game, providing a safe passage for the host into the knockout phase. Needing six goals to overrun Brazil on goal difference, La Albiceleste did exactly that and with the Argentina-born Ramon Quiroga guarding the Peruvian goal, the win had the fingerprints of the brutal regime all over it, but nothing has ever been proven. The Dutch, notably and consciously inferior to the gifted Spaniards, embarked on a bruising policy of harsh challenges, deliberate fouls, which cast a pall over the whole 2010 World Cup final. By his early failure to act decisively and responsibly, referee Howard Webb had vitiated his authority.

Had the big, bald policeman English referee, Howard Webb, only sent off Holland’s Nigel De Jong after just 17 minutes of the summit clash after his shocking assault on Xavi Alonso, it could have been a very different game.. But Webb let him stay on the field and from that moment, it was downhill all the way.

Ironically, near the end, the only player to be dismissed was the Dutch centre back Heitinga, for the second of two fouls infinitely less serious and dangerous than that committed by De Jong.

Dutch plan party before final but….. The West German team poses with the World Cup trophy after beating the Netherlands in the final at Olympic Stadium in Munich on July 07, 1974.
| Photo Credit: AFP

In the early 1970s, Dutch League leader Ajax Amsterdam brought in the concept of Total Football, where any player (barring the goalkeeper) could play in any position in any part of the field. It worked wonderfully well for the team, three League titles and European success three years in a row from 1971 to 73 bearing testimony to the system’s effectiveness.

The national side, too, took a leaf out of Ajax’s book and was set to conquer the world, playing its own variety of Total Football. With unbelievable talents including the Feyenoord pairing of Wim Jansen and Rinus Israel and Ajax starlet Johan Neeskens and striker Piet Kezier, the team looked capable of trampling any opposition. But outshining them all in flair and fury was Johan Cruyff, playing for Barcelona then, after walking out of Ajax due to an argument over captaincy.

On watching its performance in the initial stages of the 1974 edition, the world instantly fell in love with the gifted side, wearing the iconic bright orange kit, and its magical leader. The mood was of celebration and the players had their girlfriends and wives stay over, and each goal, each win was celebrated as if the Cup had already been won. Holland was to meet Germany in the final, and a major party was planned at the Dutch team hotel on the eve of the game, in anticipation of victory.

But those plans fell apart when German newspapers published details of it. The final next day was a similar fiasco, as Paul Breitner and Gerd Muller cancelled out Johan Neeskens’ early penalty. Germany won its second title, with Holland, another brilliant side like Hungary in 1954, falling at the final hurdle only because of overconfidence.