Football aficionados in the country can be thankful to a certain gentleman called Rahul Mehra who had practically crusaded to bring down empires constructed by political bigwigs to rule sports federations at their will and desire. Mehra, a sports activist and a senior advocate, had been for the last few years petitioning the courts to highlight the discrepancies in the functioning of the All India Football Federation under the presidentship of former Union Minister Praful Patel.

The persistence of Mehra saw the Delhi High Court, and subsequently the Supreme Court delivering orders that finally saw the termination of Patel’s rule. The winds of change came to sweep the AIFF as the Supreme Court removed the president and executive body that had overstayed by 17 months after the completion of three terms (12 years). This triggered the necessary metamorphosis in one of the oldest sports federations in the country.

The foundation for a new administrative order was set under a new constitution that was supposed to incorporate the tenets of the National Sports Code (2011). However, the Supreme Court action that instituted a Committee of Administrators replacing the AIFF executive under Patel, saw the Indian federation facing a suspension from the world body – FIFA. The suspension was lifted in just 12 days after the Supreme Court, hearing the submission of the Union Government, disbanded the CoA and asked the interim general secretary of AIFF to take over the reins and conduct the elections to usher in the new executive committee.

Bhaichung Bhutia throws his name in the ring

All the churnings in the AIFF since the Supreme Court stepped in on May 18, 2022, has been as a much-awaited change in the right direction. Former India captain Bhaichung Bhutia is thankful to the Court for wrenching out the maladies that seemed to be plaguing Indian football for the last few decades. “I think that FIFA suspending the AIFF was a bit of a harsh decision, but at the same time it has also given an opportunity to get the system right and make sure that all the stakeholders work and get the right people for the betterment of football and take it further,” said the iconic footballer. Bhaichung filed his nomination for the president’s post on the promise that he would spearhead “a change towards development.”

The former star who showed Indian footballers the road to Europe by signing a professional contract with Bury FC in the English League, pointed out the necessary areas which needed reforms; and projected himself as the best man for the task. He said that he would take the challenge of making India play the FIFA World Cup main round on merit and not seek qualification simply by hosting the event, as is the case with the Under-17 Women’s World Cup, which was under a cloud after the FIFA suspension but will now go ahead as scheduled in October. 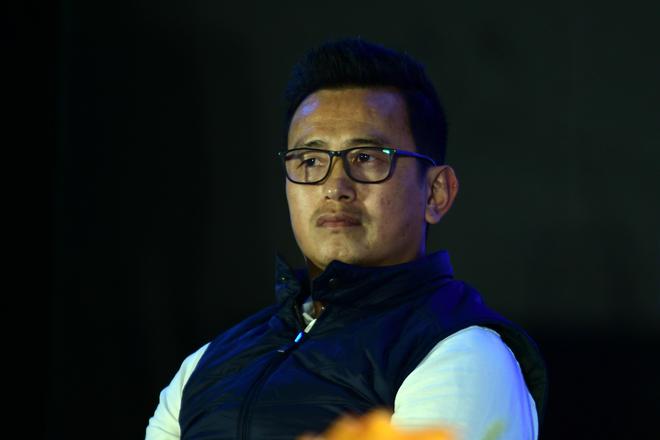 Ugly reality: “I think till today none of the state associations have been managed, guided, and financed properly by the national federation,” says former India captain Bhaichung Bhutia.
| Photo Credit: The Hindu Photo Library

“As a first step I have reached out to the state associations and told them that I will work for them by allocating a substantial amount of budget for them to have proper leagues and youth development programmes. I think till today none of the state associations have been managed, guided, and financed properly by the national federation,” Bhaichung pointed out. “My appeal to everyone related to the sport is to treat football as a priority and for that they need to bring in the right kind of people who have the ability to change the governance of the sport,” he said.

Team-mates in for a fight

What the election process for a new executive committee in the AIFF has achieved is ensuring that whoever becomes president – Bhaichung or Kalyan Chaubey – a former footballer will run the show for the next four years. Bhaichung’s opponent Chaubey is his former teammate.

Kalyan has also pledged to bring about changes that are going to benefit the players and the state associations. All 14 members of the Executive Committee are representatives of different state associations. There are 36 associations and units affiliated to AIFF and they form the electoral college that will bring to power the new executive committee.

“In the meeting with the representatives of the state associations, Kalyan (who had earlier contested the Assembly elections in West Bengal on a BJP ticket), has promised a lot to the state associations, many of whom are in dire need of funds to run their leagues. As a former footballer with a fair knowledge of administration, he understands the areas to address for the growth of Indian football,” said Avijit Paul, the secretary of Odisha FA and an AIFF executive member. 14 members have already been elected to the executive committee unopposed. Tough challenges ahead: The unflattering 104 ranking of the senior men’s team will be a concern for the newly elected AIFF team and better preparation is needed for the side ahead of next year’s Asia Cup.
| Photo Credit: GETTY IMAGES

The new AIFF body will have lots to do. Its foremost task would be the smooth conduct of the FIFA Women’s U-17 World Cup. The focus will should be on providing the right support to the Thomas Dennerby-coached young Indian team, which was recently going through an off-field crisis because of alleged sexual misconduct by an assistant coach. The Indian under-17 team has been placed in a tough group with powerhouses United States of America and Brazil.

The unflattering 104 ranking of the senior men’s team will also be a concern and better preparation is needed for the side ahead of next year’s Asia Cup.

However, the most challenging task for the new office bearers will be to ensure a smooth amalgamation between the Indian Super League and the I-League. The 2022-23 I-League champion is scheduled to be a part of the ISL 2023-24 season on sporting merit. And promotion (from I-League to ISL) and relegation (from ISL and I-League) between the two leagues is supposed to start from the 2024-25 season.

October 12, 2008: Dasmunsi goes into a coma after heart attack; Patel takes over as the acting president.

July 25, 2012: Rahul Mehra, a sports activist, files a petition challenging the AIFF election process, saying it did not follow the National Sports Code.

December 21, 2016: Patel elected as president for his third term.

November 11, 2017: SC stays Delhi HC order and asks the CoA to formulate the AIFF constitution (in accordance with the National Sports Code) within eight weeks.

November 21, 2020: AIFF requests SC to extend the executive committee’s tenure due to the non-finalisation of its constitution.

December 21, 2020: Patel-led executive committee, despite the end of its tenure, continues to operate in limited capacity till the Supreme Court decides on its petition.

May 18, 2022: SC relieves Patel and his executive committee of their responsibilities and appoints a CoA to oversee AIFF work.

May 29, 2022: Quraishi says new AIFF constitution will be ready by the end of September.

July 15, 2022: AIFF final draft constitution – framed by the CoA – submitted to the SC for approval.

July 18, 2022: State units express unhappiness with several provisions in the final draft constitution, but agree to “find a middle ground” to avoid a FIFA ban.

July 26, 2022: FIFA recommends AIFF to have 25 per cent eminent player representation in its Exec. Comm. as co-opted members instead of the 50 per cent stipulated in the draft constitution by CoA.

August 3, 2022: Supreme Court passes an interim order asking the AIFF to hold and conclude elections for its executive committee as soon as possible, prioritising U-17 Women’s World Cup.

August 6, 2022: FIFA threatens to suspend the AIFF and take away the U17 WWC hosting rights due to third-party “influence.”

August 10, 2022: The CoA moves to SC seeking contempt of court action against Praful Patel and several office-bearers of state football associations for “interfering with the administration of justice.”