Iga Swiatek can cement her status as world number one on Saturday when she faces history-chasing Ons Jabeur in the US Open’s women’s final.

Swiatek would become the first woman in six years to win two different Grand Slams in the same season if she adds the US Open crown to the French Open title she collected in June.

The rising Polish star underscored her resilience in Thursday’s semi-finals, recovering from 4-2 down in the final set to defeat hard-hitting sixth seed Aryna Sabalenka 3-6, 6-1, 6-4 at Arthur Ashe Stadium.

That hard-earned victory left the 21-year-old from Warsaw on the brink of a first Grand Slam title on a surface other than clay.

Grand Slam glory and history on the line 🏆

A two-time champion at Roland Garros, Swiatek admitted before the US Open that she found the uniquely raucous atmosphere at Flushing Meadows a challenging environment.

But she has proven her adaptability over the past fortnight, twice recovering from being a set down to reach the final. Her calmness under pressure rescued her in Thursday’s clash with Sabalenka.

Broken three times in the opening set by the dominant Belarusian, she regrouped mentally in an emergency bathroom break and returned to grind out victory.

“When I was younger all I would do in the bathroom between sets after I lost was cry,” Swiatek revealed later.

“But this time I could think about what to change and actually problem solve.”

That mental durability is the result of her work with sports psychologist Daria Abramowicz over the past two years.

“Earlier in my career I felt like my emotions kind of were taking over and I was panicking a little bit when I was losing,” Swiatek said.

“I grew up. And the work we’ve put in with Daria for sure helped. Now it’s just easier for me to actually logically think what I can change,” she revealed.

Part of Swiatek’s mental approach has been to embrace her uncertainty with hardcourts.

“I trust myself for sure on clay,” she said. “Here I just try to accept maybe that sometimes I’m not going to trust myself. It’s not something negative for me. I find it pretty motivating to try and get better.”

Swiatek’s preference for clay was on full display in her only other meeting with Jabeur this season, when she dispatched the Tunisian 6-2, 6-2 in the Italian Open final at Rome.

Yet Swiatek and Jabeur head into Saturday’s final with a 2-2 record from their four previous encounters.

Jabeur has also inflicted hefty defeats on the Polish top seed in recent seasons, beating her in straight sets at Cincinnati in 2021.

“Our matches are always kind of physical and really tight, even though the scores may not be,” Swiatek said of Jabeur.

“She’s just a tough opponent and fully deserves to be in the final. I think it’s going to be a great battle.”

Fifth seed Jabeur, meanwhile, has also enjoyed a breakout year, which saw her become the first African woman to reach the Wimbledon final in July before her campaign in New York. 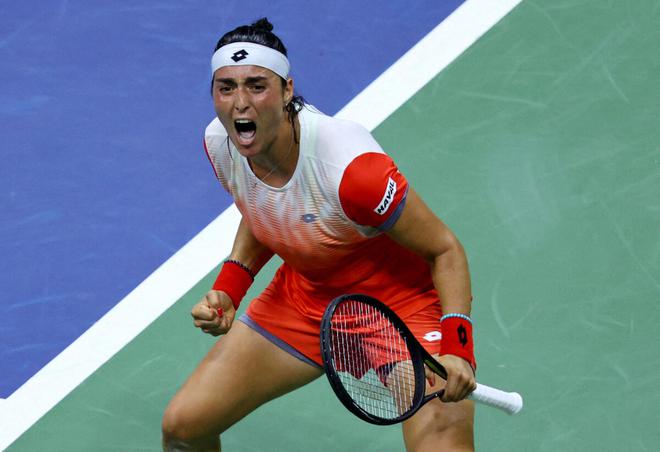 Jabeur could make history by becoming the first woman from Africa to win a Grand Slam title on Saturday.

Jabeur – affectionately known as the “Minister of Happiness” in her homeland — was unable to deliver the Wimbledon title, beaten in three sets by Elena Rybakina.

However, the late-blooming 28-year-old looks more than capable of claiming her maiden Grand Slam on Saturday.

In the semi-finals on Thursday, she demolished the in-form Caroline Garcia in straight sets, using a powerful service game to keep the Frenchwoman on the back foot while cleverly varying her range of shots in a 6-1, 6-3 rout.

Jabeur, however, is under no illusions that Swiatek is likelier to prove a tougher nut to crack.

The Pole has not dropped a set in the nine tournament finals she has played since her lone WTA final defeat in Lugano three years ago.

“I know she struggled a little bit with the balls here, but I don’t see her struggling much, to be honest with you. She’s playing awesome. It’s going to be a tough match. Definitely going for my revenge. I love playing on this surface, and I feel like I know exactly what to do against her,” she added.