Spain will look to make an early impression in the 2022 FIFA World Cup, when it starts its Qatar WC campaign on November 23 this year.

Luis Enrique had to take stern decisions as it made notable exclusions, including goalkeeper David De Gea and former defender and captain Sergio Ramos, in the 26-member team for the FIFA World Cup 2022.

Spain is competing in its 16th FIFA World Cup and this is its 12th successive appearance, having not missed a final tournament since 1974.

It is one of the eight nations to have won the World Cup, but its last major trophy since has been the European Championship a decade ago.

La Furia Roja was knocked out in the group stages of the 2014 World Cup and saw its head coach Julien Lopetegui get sacked on the eve of the 2018 World Cup, leaving the tournament with a round-of-16 loss to Russia in penalties.

Enrique has left out Thiago Alacantara, De Gea, Ramos and Marcos Alonso for the final squad to Qatar and will look to have a new defensive back-line.

De Gea has fallen in the pecking order of Spain since his poor performance against Portugal in the 2018 World Cup, while Thiago has struggled with injuries at Liverpool.

Pique and Ramos both won the World Cup in 2010, while Sergio Busquets will be the only member of that team to play in Qatar this year.

Another major loss for Spain has been the late recovery of Real Sociedad captain Mike Oyarzabal, who suffered an anterior cruciate ligament injury back in March this year. Though he has reportedly recovered, the winger, who started in every game for Spain in the EURO 2020, has found himself out of the squad for the FIFA World Cup.

The ray of hope for Spain, however, has been the addition of Ansu Fati. The 20-year-old made his international debut in 2020 and, in his second game, became the youngest player to score for Spain, breaking a record held since 1925 by Juan Errazquie.

The Barca forward has struggled with injuries, making his last appearance for Spain in October, two years ago. That may be a point of concern for Enrique, with Alvaro Morata, Ferran Torres and Marco Asensio as some of the other key forwards in the squad.

No Xavi, Iniesta, no problem

After poor performances in the previous two editions, Enrique has shown some optimism with a semifinal spot in the European Championship and a runner-up spot in the Nations League last year.

In the World Cup qualifying campaign, Spain’s possession-based brand of football made a comeback, with an average possession of 76 per cent, six wins and 15 goals in eight games. 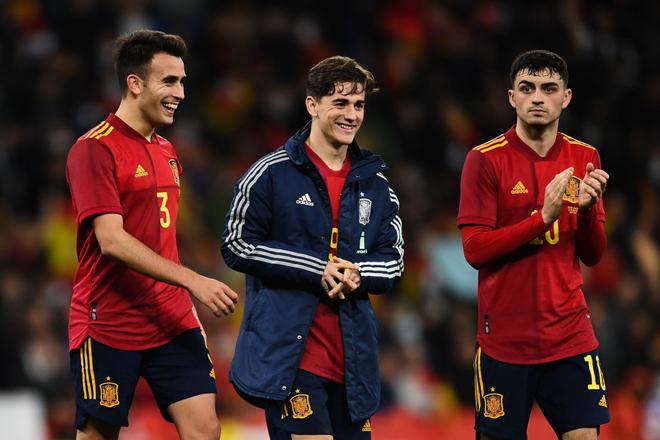 The midfield will see some promising youngsters playing their first World Cup, such as midfielders Gavi, Pedri and Carlos Soler.

The chemistry of the two Barca midfielders in the Spanish National team may just shift from that between Xavi and Andres Iniesta to Pedri and Gavi as Enrique fields a younger squad in Qatar 2022.