It looked like Lionel Messi took 10 minutes and a penalty (that silenced a raucous Saudi crowd behind the team dugouts at the Lusail Stadium) to set sails for yet another World Cup adventure – his last – to exorcise the ghosts of disappointments past.

But his sails lost their wind in 10 terrifying second-half minutes, handing Argentina a 2-1 opening-game ambush by Saudi Arabia to give him and his mates a new nightmare.

Starting from left to right in the first afternoon match in Qatar, the Argentines, particularly left back Nicolas Tagliafico, struggled for a bit to adjust focus in the beating sun. But Messi soon had his first shot on target after a Lautaro Martinez backheel in the second minute. His left footer, though, was pushed away by goalkeeper Mohammed Alowais.

A foul on De Paul on the left in the eighth minute saw Messi play the freekick wide, but the game was abruptly stopped as referee Slavko Vincic ran to the VAR console to check whether Saud Abdulhamid grappled Leandro Paredes to the ground from the earlier corner. An unflustered Messi, enjoying the moment, waited an eternity to allow the goalie to make his move before placing the simplest roll-ins to his now-vacant right.

The Saudis didn’t immediately give up, and a nice passage of passing saw Abdulhamid deliver a cross inside the box, bringing Emiliano Martinez his first action of the game in the 16th minute. But Argentina played the first half with a swagger of its 36-match unbeaten run, composed in possession, willing to wait for its time, but never allowing the Saudis a minute of respite.

The world thought a second came in the 23rd minute after Messi ran behind the high-lying defence to latch on to a lofted pass from Alejandro Gomez on the left. His calm swerving finish past the keeper, however, was ruled out for an offside.

A few minutes later, the lifted effort of Lautaro, the next shot to find the back of the net, was also disallowed. Another goal came with another offside in the 35th minute, the Saudis saved either by the almighty’s magnanimity or the smart movement of its defensive line.

The disallowed goals left a sense of foreboding, despite the Argentine dominance, as half-time appeared.
Fortune favoured Saudi Arabia soon, as Saleh Alshehri scored between the legs of a late-diving Cristian Romero and the outstretched left hand of Emiliano to redraw the balance of power almost immediately after the restart. The Saudi Arabia fans rediscovered their voice and the stadium again had a festive buzz. They grew louder as their champion Salem Aldawsari fired an electric arcing effort to the top left corner of Emiliano’s goal in the 53rd minute.

Suddenly, Argentina’s recent form didn’t matter, and a group of elite athletes, for 10 minutes, were left cowering like the helpless Brandyfoots facing the Dweller’s fire. 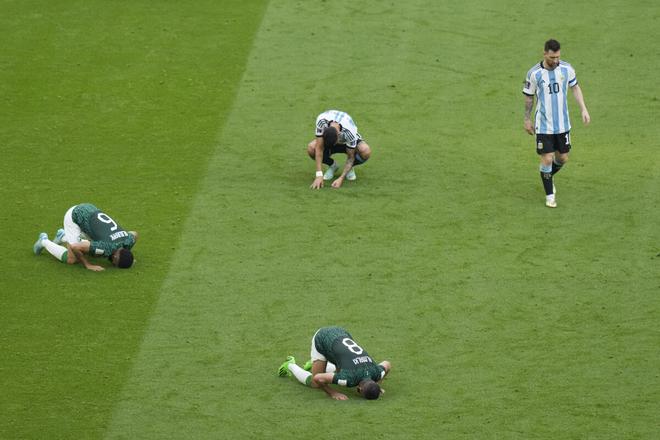 A dejected Messi walks at the end of the full-time.
| Photo Credit: AP

A triple substitution by Lionel Scaloni didn’t have the desired result – a goal-line save by Abdulelah Al-Amri from a Julian Alvarez shot in the second of the eight additional minutes and just later a header from him, gleefully accepted by a turbocharged Alowais, where the closest this Argentinian dhow came to a last-minute mid-sea rescue.

In the end, there were tears of joy for the Saudi supporters, who had backed their team throughout, but Argentina, desperate to deliver the Cup to its genius, was only left pondering its World Cup future.