Caretaker boss Aaron Danks got off to a flying start with Aston Villa when it put its poor start to the Premier League season behind with a rip-roaring 4-0 win over Brentford in his first game in charge on Saturday.

Danks, who replaced Steven Gerrard following his sacking on Thursday in the wake of a 3-0 defeat to Fulham, saw his side score three times in the opening 14 minutes as it blew away Brentford, along with the memory of their slow start.

“I thought the boys, from the opening five minutes, they played with intensity and sustained that. I am really, really pleased with the game and performance,” a delighted Danks told the BBC.

“Going into the game, you always have a bit of nerves and apprehension, but the moment I was on the touchline I was just focused on the performance. To see the fans and players at the end it was a nice feeling.”

The game was just over a minute old when Villa went in front through Leon Bailey, and there was a little extra satisfaction in the manner of the goal for the coach, who worked as assistant to Vincent Kompany at Anderlecht before joining Villa.

“It was a really well-worked set-piece off the training ground for the first goal, so credit to the staff for that and the players for executing it,” Danks explained.

After a turbulent week at the club, his side’s performance was markedly different from their often sluggish efforts under Gerrard, but Danks would not be drawn on his own future.

Clinical Leicester mauls Wolves to move out of relegation zone 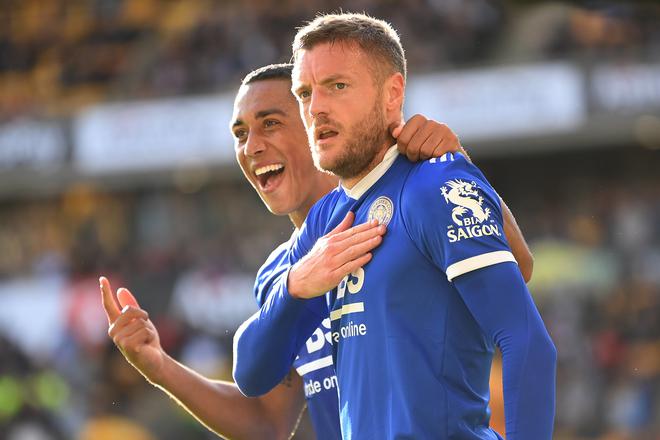 Leicester City thrashed Wolverhampton Wanderers 4-0 in the Premier League on Sunday for its first points away from home this season to move off the bottom of the standings and out of relegation zone.

Back-to-back league wins moved a clinical Leicester — which had lost all its away games — up to 16th while struggling Wolves fell to a fifth defeat in six games to drop to 19th as the home fans booed Steve Davis’ side at the final whistle.

“It is our first away win and it is extra special. Psychologically it (moving out of the relegation zone) is a boost,” Leicester skipper and goal scorer Youri Tielemans said.

“We did the basics really well and scored early… We knew they were going to come at us and there would be space. We executed that really well.”

Wolves started brightly but it was Leicester who drew first blood when a clearance fell to Tielemans and the midfielder fired a volley from more than 20 yards out that arrowed into the top corner.

A buoyant Leicester side then cut open the Wolves defence 11 minutes later as Harvey Barnes played a one-two pass with Kiernan Dewsbury-Hall before firing a shot from an angle past goalkeeper Jose Sa to double the lead.

Wolves nearly halved the lead towards the end of the half but keeper Danny Ward pulled off a spectacular save to deny Daniel Podence’s lashing strike before safely catching Diego Costa’s follow-up header.

Leicester’s top scorer James Maddison put the game to bed in the second half when he made room for himself at the edge of the box before whipping in a low shot past Sa for his sixth goal of the season, leaving Wolves deflated.

Brendan Rodgers’ side completed the rout when they won the ball back from a sloppy Wolves side, with Timothy Castagne’s uncontested cross turned in by Jamie Vardy as the 35-year-old striker scored their fourth goal and his first of the season.