For the Milwaukee Bucks, a Conference semifinals exit is deemed a below-par season, and that is a testament to the quality of this ambitious NBA team.

Going into the last season as defending champion, Bucks’ season fizzled out with the team bottling a 3-2 lead to Boston Celtics in the Eastern conference Playoffs second round.

Perhaps, it was no shame to lose to Celtics, given its supreme lockdown defence that suffocated teams last season, but lack of clutch-time hustle by the Bucks players was partly a reason for the team’s tame performance in the last two games of the season.

Giannis Antetokounmpo, as great a player he might be, cannot always carry the team home.

Apart from poor three-point shooting in the semifinals (27.9%), what cost Bucks dearly was the absence of Brook Lopez.

Bucks missed the service of the seven-foot centre who was ruled out for the entire season. With a career average of 16.4 points and 6.2 rebounds, Lopez is a massive presence in the paint.

While Lopez is back in action for the new season, the team still needs to wait for the return of Khris Middleton from a wrist injury. The forward’s absence was another reason for an underwhelming Playoffs for Bucks, especially from the three-point line.

Middleton has a career average of 39.2% from downtown to go with his 17.2 points.

Lopez’s return to the preseason will offer a boost to Bucks fans that their team can finally go all the way this year. Middleton, too, is not expected to be out for too long.

During the offseason, Bucks has focused on getting its roster back from last season. It showed faith in players it believes have the calibre to take the team to a second title in three years. That is why it re-signed three crucial role players in Bobby Portis, Wesley Matthews, Pat Connaughton and Greyson Allen.

Here is a look at how the Milwaukee Bucks squad looks like in the new season.

Which players has Milwaukee Bucks brought in? Ingles was the only out and out signing by Bucks in the offseason. The former Utah Jazz forward will miss the season with a torn ACL in his left knee.

When fit, his 7 point per game average and decent shooting ability give another forward option to the team.

The only other addition to the Bucks roster this year has come through a round 1 NBA Draft pick.

MarJon Beauchamp played for the Yakima Valley Yaks in college and boasts of an impressive 45.8% shooting efficiency from three-pointers in the 2022 NBA Summer League.

With Middleton set to miss the initial matches, many believe that the 6 foot 6 forward could be slotted in the starting five.

Apart from Beauchamp, Bucks also secured the signing of A.J. Green on a two-way contract.

What could the Milwaukee Bucks starting lineup look like?

The playmaking role in the new season will yet again be donned by Jrue Holiday. The guard has been a welcome addition to the Bucks’ ranks. His impact was instantly seen when he assisted nearly 9 shots every game during the Playoffs in Bucks’ title-winning season.

Even last season, with figures of 18.3 points and 6.8 assists, Holiday was an able partner for Giannis.

For perimeter shooting, Greyson Allen will be taking charge. Allen attempted a total of 389 three-point shots during regular season and had an efficiency of over 40%. This figure remained roughly the same during Playoffs as well. 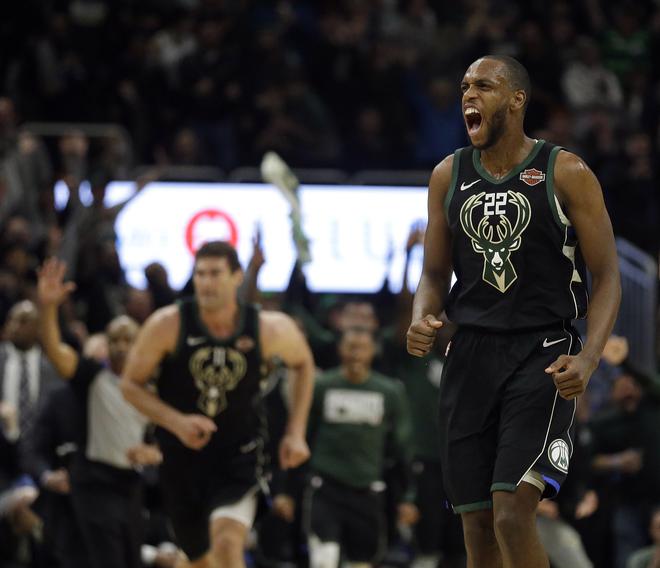 Middleton has a career average of 39.2% from thre three-point line to go with his 17.2 points per game.
| Photo Credit: AP

Allen’s role becomes even more important during the start of the season, given Bucks’ best three-point shooter Middleton will be out. Pat Connaughton, a player re-signed by Bucks, will be an option from the bench to fill this role.

Bobby Portis is another important part of this roster. Coming off the bench, his presence adds to the Bucks dominance in the paint. He averaged 14.6 points and 9.1 rebounds during the last regular season. Out of his 657 rebounds in the period, 180 were on the offensive board.

But if Bucks have to challenge for the title, The Greek Freak has to offer his best. And his best somewhat looks like 30 points, 12 rebounds and 6 assists per game, as it did last season.

A slightly better overall shooting efficiency from the arc, coupled with the usual defensive brilliance, and Bucks could get their hands on the Larry O’Brien trophy.