Klay Thompson returned after an extended injury break. Jordan Poole made heads turn and jaws drop. Andrew Wiggins gave glimpses of what he is capable of doing, and Stephen Curry, a man pushing the greatness debate, got his hands on the Finals MVP trophy at last.

Life has been good for the San Francisco faithful. Not that the three titles in the previous seven years were bad. But the team is back on track after the injury-marred and play-off deprived seasons in 2020 and 2021.

While last season was spectacular in its own right, the party is just starting in the Bay Area.

One might argue that the Warriors will start its title defense with a slightly depleted roster, but that in no terms means a compromise on quality.

Key names such as Gary Payton II and Toscano-Anderson are gone, but the team’s core is in place. The new season would also give more on-court time for Thompson, Curry and Draymond Green.

Young guns Wiggins and Poole will have James Wiseman, who would expect more game time.

Here is a look at the major changes in Golden State Warriors squad in the new season.

Which GSW players were traded out? 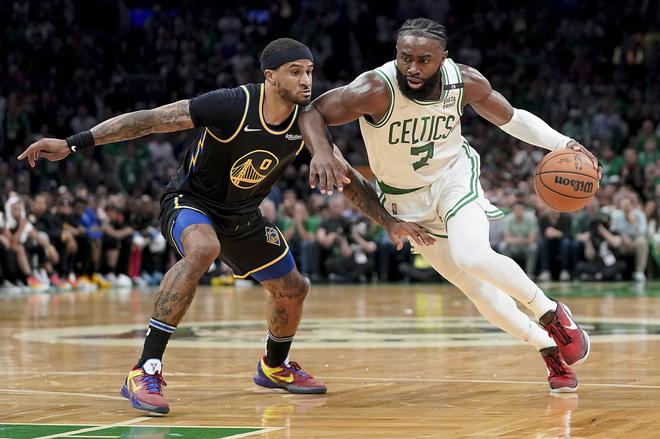 Gary Payton was crucial for Warriors in Game 2 of the NBA Finals and had seven points, three assists and three rebounds.
| Photo Credit: AP

The forward moved to Portland Trailblazers on a bumper $18 million three-year deal. Payton was a seamless defensive option off the bench. Incredibly effective in lock-down and match-up defence, Payton averaged 1.4 steals and 3.5 rebounds in the regular season.

Though he missed games in the Playoffs due to a fractured elbow, his comeback performance of seven points, three assists and three rebounds in Game 2 of the Finals gives a sense of his impact.

Coach Kerr trusted Porter and started him in the last three games of the NBA Finals against Boston Celtics.

Who are the new players GSW traded in?

Warriors has replenished its ranks by getting hold of a mix of experience and youth with two signings. 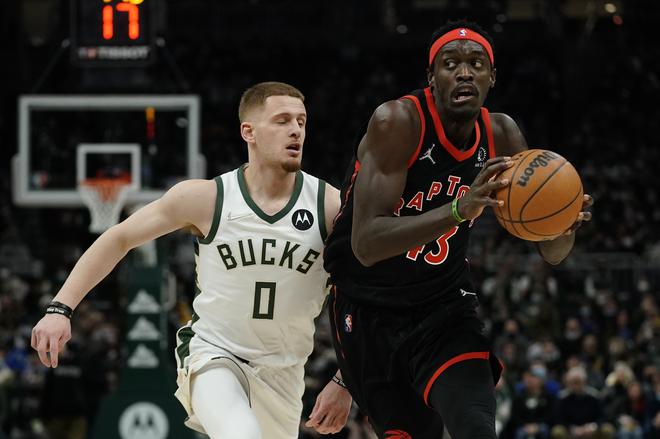 A part of the Milwaukee Bucks’ 2021 title winning squad, DiVincenzo is no stranger to winning big.

Although an injury ruled him out of the Playoffs that season, DiVincenzo had figures reading 10.4 points, 5.8 rebounds and 3.1 assists with 37.9% shooting from beyond the arc.

He fits perfectly into the perimeter defence role left open after Payton’s exit. With more opportunities to fire the ball from downtown, DiVincenzo can offer solid firepower from the 3-point line.

Though expected to be a rotation player, Green’s role with the team will stretch beyond the court. Into his ninth season, and having Playoffs experience, Green brings stability to the Warriors bench.

A role similar to Andre Iguodala, who will also continue with Warriors in the last season of his storied career.

At six foot eight, Green offers a significant presence in the paint on both ends. The 32-year-old has a 5.7 rebounds per game career average to go with 7.9 PPG.

While the bench might have changed, the Warriors starting five is settled, and looking potent as ever.

Wiggins was the highlight of the season. In a season where he made his All-Star debut, the forward averaged 17.2 points during the regular season. But what impressed, was his defence.

Wiggins averaged 7.5 rebounds in the Playoffs, his highest, along with a block and a steal per game.

A player rebounding at 7.5 per game, coupled with Kevon Looney’s 7.7 rebounds per game set the tone for the Warriors in the Playoffs, and also covered for the below-par Draymond in the postseason.

Looney started all 82 games for the Dubs last season and the contract extension indicates he’ll be doing more of it in the coming season.

With Thompson fit, Poole will find himself restricted to the sixth man role more often this year. Yet, with an average of 18.5 points last season at 44.5%-FG last- season, Poole will prove to be a handful for teams, even from the bench. 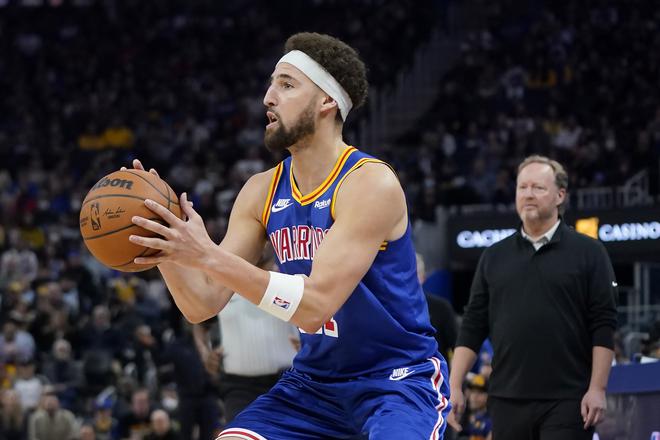 Klay Thompson had a 3P% of 38.5 during the Playoffs last season.
| Photo Credit: AP

With all clogs of the machine working and well-gelled, one can expect the usual magic from the ‘Splash Brothers’.

While Thompson took time to get his rhythm last season, a proper pre-season camp and matches should prevent any further hiccups.

For Curry, apart from maintaining his ridiculously high standards the league has become used to witnessing, staying in proper shape and fitness will be crucial.

The point guard suffered an injury in the last leg of the regular season last year and it led to a significant drop in the team’s performance.

Curry will undoubtedly do the heavy lifting. If he can produce numbers similar to 25-5-8, Warriors will be in for another title.