Shortly after Argentina’s stunning loss to Saudi Arabia in the football World Cup in Doha on Tuesday, a call recording did the rounds on WhatsApp among Malayalees. It was a man speaking to his friend, saying that he just heard about the ‘catastrophe’ and it must be ‘one of those days when nothing works’. And then his voice dissolved into a liquid whimper, and he wound up saying “can’t handle this” and the line went cold.

The words, the tone and the quiver all collectively pointed out both personal grief when restricted to this anonymous fan, and it also highlighted the collective love that people from Kerala have towards the ‘Beautiful Game.’ The World Cup heralds an ulsavam (festival) once in four years across God’s Own Country. Streams that split villages become fraught borders as one side roots for Argentina, and the other side may either pick Brazil, Portugal or Germany. 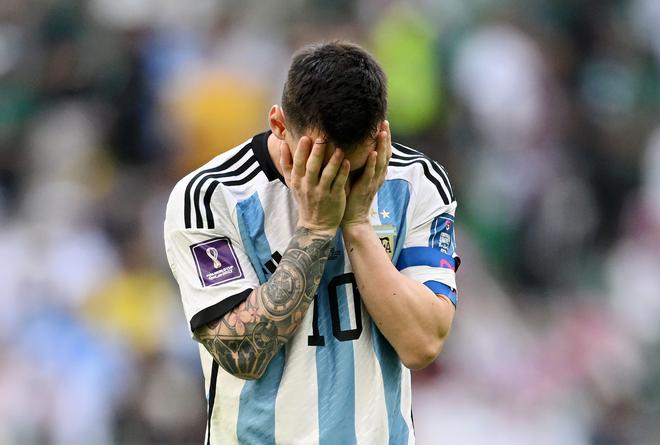 Barbs are exchanged over chai and banana fritters at local tea shops, at times the odd toddy bottle is smashed at the neighbouring watering hole and close pals who once shared their nicotine indulgence now sit on the opposite fence. The air is high on football love or angst depending on which team you are rooting for, while freshwater fish and ducks follow the zen path in meandering backwaters and canals. Meanwhile, on Terra-firma, there will be an inevitable tumult over a month as followers praise and dissect Lionel Messi or Cristiano Ronaldo while also harking back to those magical days when Diego Maradona and Pele soared.

The sliver of land wedged between the Western Ghats and the Arabian Sea has an eternal soft spot for football. Perhaps the sighting of a village game from train windows may be on the decrease but the sport is still played with “ chavittada” (kick it man) being a chorus from fallow paddy fields, temple maidans and abandoned courtyards of ancient tharavads (ancestral homes). If football is a love story for most in Kerala, it takes on the zest of a no-holds-barred torrid romance in the Malappuram district. With its seven-a-side football games and community-watching of European leagues, this is a land that also seeks its gods within the sporting realm.

The clues about Kerala’s fondness for football are littered across pop culture. Be it that old movie clip of Mammootty playing football as if the sphere is glued to his boots or that heart-warming film Sudani from Nigeria, which highlighted club rivalries, fandom and humanity in equal measure, there is no way you could avoid this passion or madness from Kasaragod to Thiruvananthapuram. The cut-outs for Messi or Ronaldo, the way Malabar villages emptied when Maradona dropped into Kannur to inaugurate a jewellery shop or even the needless scuffle at a recent wedding between fans of Argentina and Brazil, are all threads that reveal the space that football occupies in a Keralite’s heart. And when Argentina lost to Saudi Arabia, the “ Attimari” (upset) headline in Malayala Manorama’s Twitter handle had the sombre note of a million lacrymal glands shedding tears.

There is a lingering irony, too, as a significant chunk of Kerala’s money-order economy is linked to West Asia, in which Saudi Arabia plays a part. However, when it came to football, and that too in a contest involving Argentina, there was no mistaking which way the State leant. When Messi looked downcast after the Saudis triumphed, Malayalees either indulged in self-flagellation by posting old Malayalam film memes linked to Argentina’s defeat or they displayed their shredded hearts.

Kerala has its desi heroes be it in politics, literature, celluloid or even sports, like P.T. Usha and I.M. Vijayan. But it also has a global spirit while embracing history, arts and recreation. Che Guevara, Gabriel Garcia Marquez or even actor Vijay from across the border in Tamil Nadu have a sprawling fandom that rouses emotions. But for now and over the next few weeks, a ball between whirling feet will maintain a hypnotic sway over a State, and it is a love that echoes similar feelings from Goa, Bengal and the North East. For now, let’s say “ chavittada” and pray to our footballing gods.