The debate between Lionel Messi and Cristiano Ronaldo has been going on for an eternity. And by the looks of it, it isn’t dissipating anytime soon. Both players have had rough patches in their careers. However, if recent form is anything to go by, the Argentine is enjoying better a fortune than his Portuguese rival.

The Qatar World Cup is fast approaching. As the recent cycle of UEFA Nations League matches and international friendlies come to an end, Argentina manager Lionel Scaloni and Portuguese manager Fernando Santos will be in contrasting moods over Messi and Ronaldo, respectively.

Messi in the 100 club-smooth sailing for the Albicelestes

Messi enjoyed a good international break with Argentina. Marking his 100th international win against Jamaica with a brace, he took his tally of international goals to 90 in 164 appearances, keeping his spot as the second-highest active goalscorer in international football, behind Cristiano Ronaldo’s tally of 117 goals. 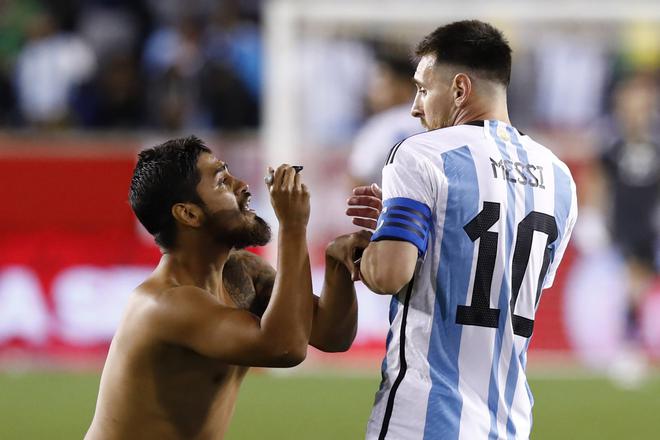 Argentina’s Lionel Messi reacts as a fan ran on the pitch to ask for his autograh during the international friendly football match between Argentina and Jamaica at Red Bull Arena in Harrison, New Jersey, on September 27, 2022.
| Photo Credit: AFP/ANDRES KUDACKI

Messi’s goalscoring has not only enriched his personal tally but helped Argentina stretch its unbeaten streak to 35 games- a run that started back in 2019. Argentina is just two games away from matching Italy’s unbeaten streak of 37 games.

At the club level, Messi has six goals and eight appearances for Paris Saint-Germain this season. If the Argentine remains consistent and injury free, he will surely have a crucial role to play in Argentina’s World Cup run in Qatar.

Ronaldo- undisputed record at the international level but worrying form

Ronaldo is the undisputed leader in international goalscoring, with a tally of 117 goals in 191 appearances. However, the recent form of the 37-year-old for his country and club is far from the lofty standards he has set over his long career.

Ronaldo marked the end of the international break with a 1-0 loss to Spain, which saw Portugal crash out of the Nations League. Needing only a draw in its last match, Alvaro Morata’s 88th-minute winner sent the Spaniards to the Nations League top four. Ronaldo, known for his elite finishing, missed a crucial chance to Portugal forward against the Spaniards.

While football is a team sport, Ronaldo’s underwhelming form will surely be a worry for Portugal manager Fernando Santos.

At the club level, Ronaldo has just one goal in eight appearances for Manchester United- worrying numbers for a regular goalscorer like Ronaldo.

Football is an unpredictable sport- the recent numbers of both the players are just mere indications of the form the two players are going through but nothing is set in stone. It would be unfair to forget Ronaldo’s ability to perform on the big stage when his team needs him the most.

Not too long ago, a large chunk of the footballing fraternity, including the pundits and fans, were scathing in their assessment of Messi’s exploits with his national team until he won the Copa America in 2021.

Both Messi and Ronaldo have etched their name in footballing folklore, and fans would want to just relish whatever football they have left.

The Qatar World Cup, in all probability, will be the last time the two legends don the threads of their respective countries at the grandest stage in football.