1983 WORLD CUP WIN ANNIVERSARY: The 1983 World Cup not only changed the way cricket was viewed and played in India but it changed India itself. 39 years ago, on this very day, when Kapil Dev lifted the coveted trophy in the iconic Lord’s balcony, it inspired and brought together a nation of 750 million, and still continues to do so.

We look at 8 insights – on the players and performances that stood out in India’s triumphant journey in the tournament. KAPIL DEV – THE HIGHEST IMPACT PLAYER OF THE TOURNAMENT

Kapil Dev’s unbeaten 175 off just 138 deliveries against Zimbabwe at Tunbridge Wells (from 9 for 4 which had soon worsened to 17 for 5) was the second most impactful batting performance in India’s ODI history till then (after Rohit Sharma’s world-record 264). He absorbed the pressure of wickets falling around him, resurrected the innings and yet ended scoring at a rate much higher than the match norm.

So devastating was his batting display that his performance with the ball in the match is completely forgotten – Kapil was the most restrictive bowler of the match conceding just 32 runs in his 11 overs – his efforts going a long way in keeping the Zimbabwe batsmen in check and ultimately resulting in a crucial 31-run victory for India.

This was a quality that defined Kapil’s performance with the ball throughout the tournament – the ability to bowl tight spells and have a high Economy Impact – basically give away runs at a lower rate than the match norm. Defending a paltry 183 against the West Indies in the final, he bowled as many as 4 maidens and kept a tight leash on the batsmen conceding just 21 runs in his 11 overs.

As a player, Kapil did not fail even once in the 8 matches he played in the tournament. He was the fifth-highest run getter and scored at a strike rate of 108.99 – the second-highest (min. 100 runs) of the World Cup after Rod Marsh. He also picked 12 wickets.

Coupled with this was his agility in the field – running back to take the catch of Viv Richards – perhaps the single-most defining moment in India’s cricket history! Add to the mix his inspiring leadership which took India to a historic win and Kapil Dev was the premier all-rounder of the tournament.

SANDEEP PATIL – THE MOST IMPACTFUL INDIAN BATSMAN OF THE TOURNAMENT

Despite being at number 16 in the Runs Tally and only the fourth-highest run-getter for India, it is Sandeep Patil who emerged as the highest impact Indian batsman of the 1983 World Cup – according to Impact Index, a holistic and comprehensive cricket analytical system which measures the contribution of a player relative to the contribution of other players in the match giving context to every performance.

Three qualities defined Patil’s performance in the World Cup – 1) he chipped in with useful contributions often coming out to bat under pressure when the team had lost early wickets, 2) he scored at a rate much higher than the match standard and 3) he raised his game in the big matches – the knockouts – giving his best when it mattered most.

Patil had a strike rate of 90 in the tournament which was several notches higher than the average standard (200-plus runs) of 66.36. He had the audacity to counter-attack the most feared opposition bowlers – the likes of Roberts, Marshall, Garner, Holding, Willis and Botham to name a few.

He came up with a defining performance in the semi-final against England – 51 off 32 deliveries and supporting acts in the virtual Quarter-Final against Australia (30 off 25 deliveries) and in the final against the West Indies (27 off 29 deliveries). 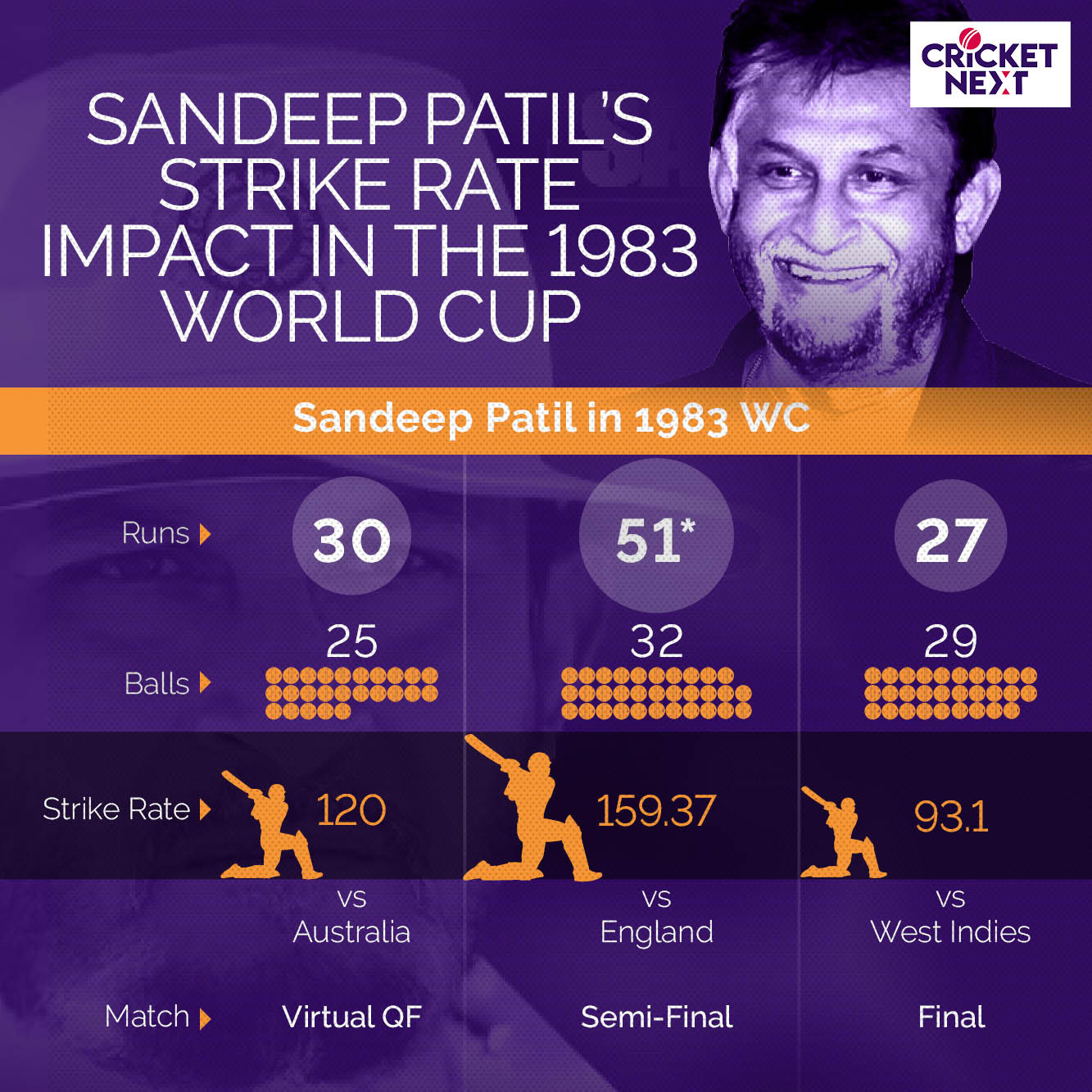 MADAN LAL – THE BEST BOWLER OF THE TOURNAMENT

Lal was consistent going wicket-less just once in 8 matches in the tournament and 11 of his 17 wickets were of top opposition batsmen (in positions 1-5). Like Patil, he raised his game in the big matches – the knockouts. He returned with 4-20 in 8.2 overs in a do or die encounter against Australia at Chelmsford but his standout performance came in the final. Against the run of play and with the West Indies running away with the match, he got rid of Haynes and then seven runs later claimed the prize wicket of Viv Richards, dramatically changing the fortunes of the match. He broke the backbone of the West Indian middle-order seeing the back of Gomes soon after. The momentum changed. India had the upper hand. The rest is history.

Madan Lal ended as the second-highest impact player of the tournament. MOHINDER AMARNATH – THE THIRD-HIGHEST IMPACT PLAYER OF THE TOURNAMENT

The Man of the Match in the semi-final and the final actually turns out to be the third-highest impact player of the tournament, after Kapil Dev and Madan Lal.

Amarnath gave two great all-round performances in the two biggest matches of the tournament. In the semi-final at Manchester, he got the crucial wickets of Gower – the highest run-getter of the World Cup, and Gatting, conceding just 27 runs in his 12 overs before anchoring the chase with a resolute 46 off 92 deliveries. At Lord’s, he scored a patient 26 and then returned with the ball to end a potentially dangerous 43-run stand for the 7th wicket getting the wicket of Dujon. He got Marshall soon after before claiming the final wicket of Holding to take India to a memorable victory.

But Amarnath also failed with the bat in 4 of the 8 matches in the tournament – this reduced his overall impact and put him behind Kapil and Lal. Not surprisingly then, his bowling impact was just 3% less than his batting impact in the tournament.

Yashpal Sharma top-scored for India in 3 big matches in the tournament. He scored 89 off 120 deliveries in their opener against the West Indies at Old Trafford playing the pivotal role as India caused a huge upset defeating the two-time defending World Cup winners – this victory gave the side belief and inspired them for the remainder of the tournament.

He then scored a quickfire run-a-ball 40 against Australia in the virtual quarter-final at Chelmsford before registering a patient 61 off 115 balls against England in the semi-final, curbing his natural attacking game, playing to the situation.

This exemplary big-match temperament in the biggest tournament in his country’s cricketing history was Sharma’s legacy to Indian cricket. Roger Binny was the leading wicket-taker of the World Cup with 18 wickets from 8 matches at 18.66 apiece. What stood out was the quality of his dismissals. 14 of his 18 wickets were of the top-middle order (positions 1-6) opposition batsmen which included the wickets of Lloyd (twice), Richards and Border amongst others.

He was phenomenally consistent and picked at least one wicket in all the 8 matches he played in the tournament.

Binny gave two outstanding performances – 3-48 against the West Indies in the opener which included the wickets of Richards and Lloyd and 4-29 against Australia at Chelmsford in which he ran through their top-order seeing the back of Wood, Hookes and Yallop in succession derailing their chase completely.

A TOTAL TEAM EFFORT FROM INDIA

There were some great individual performances but India’s historic win could not have been possible without a complete team effort – that is what the 1983 World Cup journey was.

Interestingly, the only two players who punched well below their weight and had an Impact of less than 1 were the two great batting stars – Gavaskar and Vengsarkar. The latter played just 2 matches but Gavaskar had a forgettable tournament scoring just 59 runs in the 6 matches he played.

SRIKKANTH TOP-SCORE AND HIS SIMILARITY WITH GAMBHIR

Gautam Gambhir top-scored for India in two big tournament finals – against Pakistan in the WT20 final in Johannesburg in 2007 and against Sri Lanka in the World Cup final in Mumbai in 2011.

While most cricket pundits remember Gambhir’s unique record, another Indian batsman had already achieved the feat more than a couple of decades earlier.