FIFA Women’s U-17 World Cup in India will be the first major women’s tournament by the International Football Federation in the country.

The event – first scheduled in 2020 – was postponed due to the pandemic outbreak and will start in Bhubaneswar on October 11, 2022.

The Indian U-17 team, as a result, has undergone major changes due to age constraints. One state that has a very dominant representation in the new team is Jharkhand.

Of the six, two (Astam and Purnima) are defenders, one (Nitu) is an attacking midfielder, two are forwards (Anita and Sudha), and Anjali is a goalkeeper. Astam – daughter of daily wage labourers in a remote village in Dumka – was appointed as the captain. “It is a historical occasion that one of our state’s girls is leading the side and five others are also part of it.

“I would like to congratulate the girls and extend my blessings to all the players selected in the Indian team for the FIFA U-17 Women’s Football World Cup,” Chief Minister Hemant Soren said in a statement released Thursday.

RELATED: Dennerby: India U-17 defensively strong, will be hard to score against

Astam will join forces with another Jharkhand girl – Purnima Kumari – at the back. The centre-back was a vital defender at the 2019 Women’s U17 Championship – a preparatory tournament initially planned to hone skills for the U-17 World Cup.

Playing with the Lionesses (one of the four teams in that tournament), she helped her team win the inaugural edition of the Championship three years ago.

Jharkhand’s rise in women’s football was not an overnight phenomenon. The process – spanning over three years – started with exhaustive scouting and eventually produced results in tournaments that followed.

Ashish Bose, advisor of the Jharkhand Football Association (JFA), told Sportstar that he and Suryaman Pradhan – the coach of the Jharkhand state team – have been involved in scouting missions since 2015, looking for talent across the state.

“I, along with Pradhan sir, go around various districts of Jharkhand on scouting missions under the supervision of Mr Ghulam Rabbani (the secretary of the JFA). Once we find good talent, we try and nurture them,” he says.

“There’s Pradhan sir, Gobinda Saha from West Bengal – whom we bring at our own expense – to coach them for over a month. But I agree that is not enough time, and so we need more resources, more matches and more infrastructure,” he adds.

“Unless nationals and junior nationals happen regularly, youth prospects will not prosper.”

Nitu Linda from Haldgam village of Ranchi was the star of the Sub-Junior Championship, with 13 goals in four matches. Nitu lost her mother when she was nine. Her brother works in a brick kiln. “There was an Indian U-15 women’s team manager named Vaibhav (Joshi). We recommended Nitu’s name to him. We told him that she was so good that you would not be able to strike off her name from the team list,” Ashish says, talking about the attacking midfielder, “and I’m sure, in coming days, she will be as big as Bala Devi (Ngangom Bala Devi).”

Nitu, along with Anjali Munda – a bright goalkeeping prospect – was taken into the Sports Authority of India (SAI) centre in Ranchi in the 2017-18 season and are both part of the World Cup squad now.

“Nitu has the superb quality of interception. She’s stealing a lot of balls from the opposition, is very active, always ready to move and always fighting for her team. She also has the quality to create spaces and receive balls when we have it to play crucial final passes,” Thomas Dennerby, the head coach of the National U-17 team, said.

Sudha Ankita Tirkey, from Danapur village in Gumla, saw her mother and father get divorced when she was three, and her younger sister – 14 years old now – works as a domestic help.

“He (my father) did not allow us to live in his house (after the divorce,) and so we shifted to a different village where we started everything from scratch”, she told the AIFF website.

“Football is not just a game for me. It has given me the perspective to live life freely. It is something which gave me freedom. I could do what I wanted on the field, and it felt amazing.”

Hurdles of Coaching on a local basis

When the girls started playing football in the state, the biggest problem for local coaches was convincing parents in rural areas that women could play. Anand Prasad Gope, who runs a non-profit football academy named  Right to Kick in Charihujur village in the Kanke district of Ranchi, said that villagers used to pass comments on the girls who wear shorts while playing.

“They used to ridicule a lot,” he says, “about the girls playing football, them wearing shorts, and they used to throw glass on the football grounds to stop the girls.”

Some of his former proteges have become National Champions. Nitu was his former student and Anshu Kachhap, who won the silver medal at the Senior Nationals with Jharkhand, is now an AIFF D category coaching license holder.

But the brightest student of his academy so far has been Anita Kumari – one of India’s forwards at the U-17 Women’s World Cup.

Daughter of an alcoholic father and a mother who used to work as a daily-wage labourer, it was football that became the ray of hope for Anita when she got picked for the national championships (in 2019) and eventually for the Indian team (in 2021).

A cable connection (with a television) was installed in their house for the first time after Anita won a local tournament in the village, in 2021.

Her mother was enrolled as a helper at the local panchayat office and offered regular work at a residential colony – Diamond City – close to her house after news of her daughter’s selection (in the national camp) spread in the village. Anita’s mother cannot stop smiling when talking about her daughter. “Everybody in the village used to call her Durga Anita for her courage, and she has continued to show it wherever she has gone,” she says.

Anita stole the limelight in the SAFF U18 Women’s Championship this year when she scored a screamer from 25-yards out against Nepal and has continued to score goals for fun.

In the last preparatory match before the World Cup, against WSS Barcelona, Anita scored five goals as India won 17-1.

“Anita has been playing very well for a long time. She has good speed, nice touch on the ball; she can shoot from long distances,” Dennerby said.

“She can work a bit on her crossing and decision-making – when to go behind the opponent’s defensive line and when it’s time to drop off and get the ball on the feet. But she is a really good player.”

Beyond the domain of coaching

The rise of several Non-Government Organisations throughout the state has helped the cause as well. 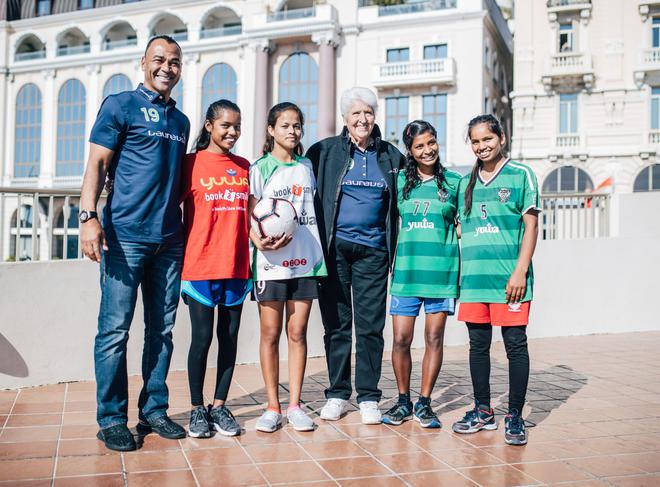 YUWA won the Laureus Good For Sport Award in 2019 for its exemplary work in the society.
| Photo Credit: Getty Images

The organisation – started by American social activist Franz Gastler – uses football as a platform for social development in rural India.

Seema Kumari, a girl from Ormanjhi, who used to play for YUWA in 2012, has gone on to earn a 100 per cent scholarship to attend Harvard University in 2021.

OSCAR Foundation, another organisation which uses football as a tool for social development, supplied boots, balls, nutrition and training kits as eight girls from the state went on to win the Dana Cup – one of the most famous youth tournaments in the world – in Denmark in 2019.

Schools have also been instrumental in facilitating the football ecosystem in Jharkhand, with St. Patrick’s School in Gumla winning the U-17 Subroto Cup title last month.

In the last couple of weeks, Jharkhand has been marred with news of girls being raped or burnt alive for rejecting marriage proposals.

When the six girls take the field on Tuesday against the United States, they will set course for the rise of women from that very state – as trailblazers of women’s football in India and Jharkhand.