A few days back, the Tunisian Ons Jabeur, the first Arab and African player to break into top 10 and the World No.2, would tell a 8-year old Charlotte, the daughter of her semi-final opponent and dear friend Tatjana Maria, “Would you be supporting me or your mommy?! I was just trying to turn her kids towards me,” she would laugh at the press conference before the women’s singles semi-final.

Just after Jabeur won the semifinal in a three-setter, both friends would envelop each other in a warm bear hug at the nets, seemingly finding it difficult to tear away. Once the handshakes with the chair umpire was done, the German Maria, who has made a mother of comebacks to the sport with two daughters, the second one just a year back, was beginning to move towards her chair. Just then, Jabeur would pull her back to the court and gesture to the crowd to acknowledge her friend.

Streaming sunshine, green grass, tears in the stands, applause in the air, and two friends soaking it all up on a dreamy day – it was quite a sight and quite a journey for both.

Last January Jabeur called for a meeting with her team to discuss the road ahead. She told them she wanted to end up in the top 20 by the end of the season. Before that season ended, the Tunisian had become the first Arab, women or male, first African to be in the top 10. “I was ready. And then I think my whole mindset changed (after that meeting). I wanted it to go as far as I (could), I love seeing Arab players on tour with me,” she told the Olympics channel last year. She would reach the quarters of the Australian Open and Wimbledon. 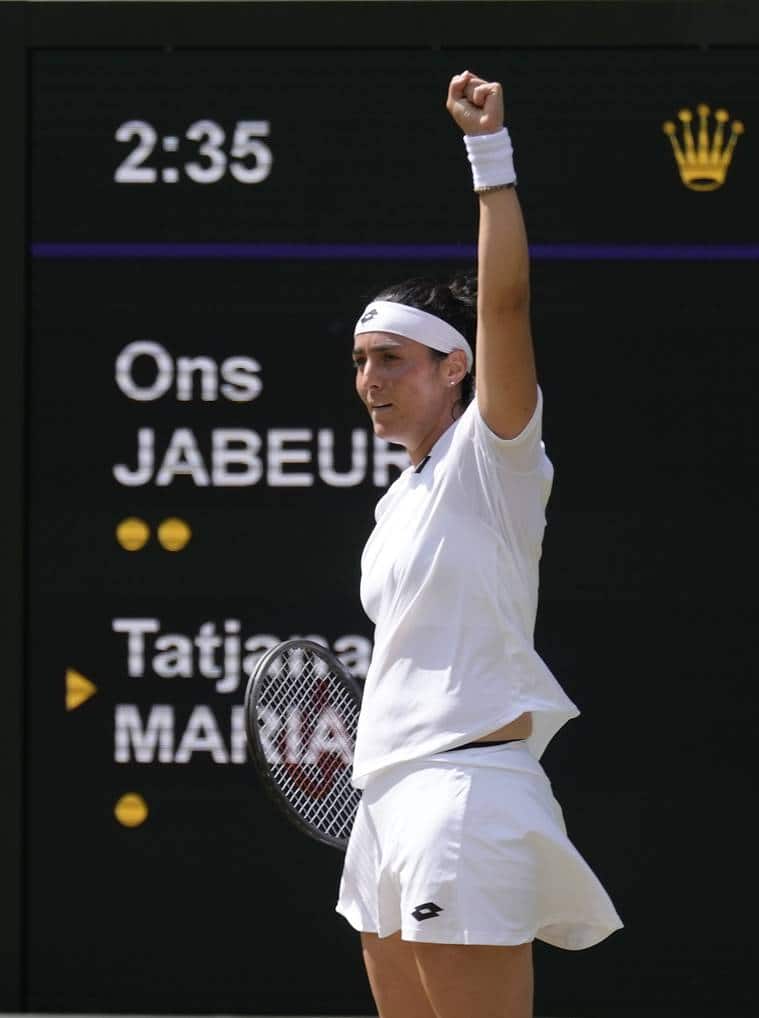 Last April, her Barbeque friend Tatjana Maria with whose family she shares a close relationship with, whom she beat in a three-setter in the Wimbledon semi-final, released a charming home video. Sunshine, laughter at an outdoors lunch table, drawing with her then 7-year old daughter Charlotte, some tennis, a bit of pool, and she would then announce that she was going to have a second kid, and would be taking a break.

Jabeur could be seen holding Charlotte’s hands and walking around outside the courts. “I love Charlotte. She is playing tennis. It’s really amazing. The little one is always smiling. I love the family.”
Meanwhile, in Tunisia during last year’s French Open, people were flocking the cafes at 4 am, watching Jabeur’s games. “I’ve seen a lot of insane pics from cafes.” Jabeur kept racking up the wins on the tour. “We (haven’t had) many Arabic players or African players winning at Grand Slams. It was a big breakthrough for Tunisia. They were really happy to see someone winning this kind of a (tennis matches). It was great.”

The new mother Maria would return earlier this year to have another go at the sport. Her idol is Kim Clijsters, the Belgian who won three Grand Slam titles after becoming a mother. Last week, Clijsters was at the centre court of Wimbledon, applauding Maria’s slice-heavy game. “I was one of the first ones after Kim,” Maria said. “She was my inspiration, and I hope I can maybe be an inspiration to others.”
The comeback wasn’t easy, though, even though she had the experience of coming back after a year after her first child in 2014. The pandemic had made it worse with no creches at venues. Worse, was the WTA rule for mothers. There are no empathetic allowances made for the mothers. No rules for them to keep their ranking in the time of their motherhood break. Instead, they are clubbed with players who take injury breaks – called Protected Ranking. Even there Maria would have it worse.

The injury players get to keep their ranking for 12 weeks. Maria was fit again after her pregnancy that she returned four weeks early in the eyes of the WTA Tour. Resultantly, they allowed her only eight tournaments.

“It is absurd that pregnant women are considered injured. In contrast to the men, the protected ranking for women only applies to two of the four Grand Slam tournaments. Some time ago at the WTA we suggested reconsidering that. We were listened to, but it was said that the top players didn’t want any change.

Thanks to my victory in Bogotá, I’m almost back in the world rankings where I was before I became pregnant. I no longer need this help. But it would have been nice to have had her before,” She told Ziet Online this March.

Her friend Jabeur is all empathetic towards her. “It’s amazing what she [Maria] has done by coming back to play. I know how much she has struggled. She deserves points for motherhood…” 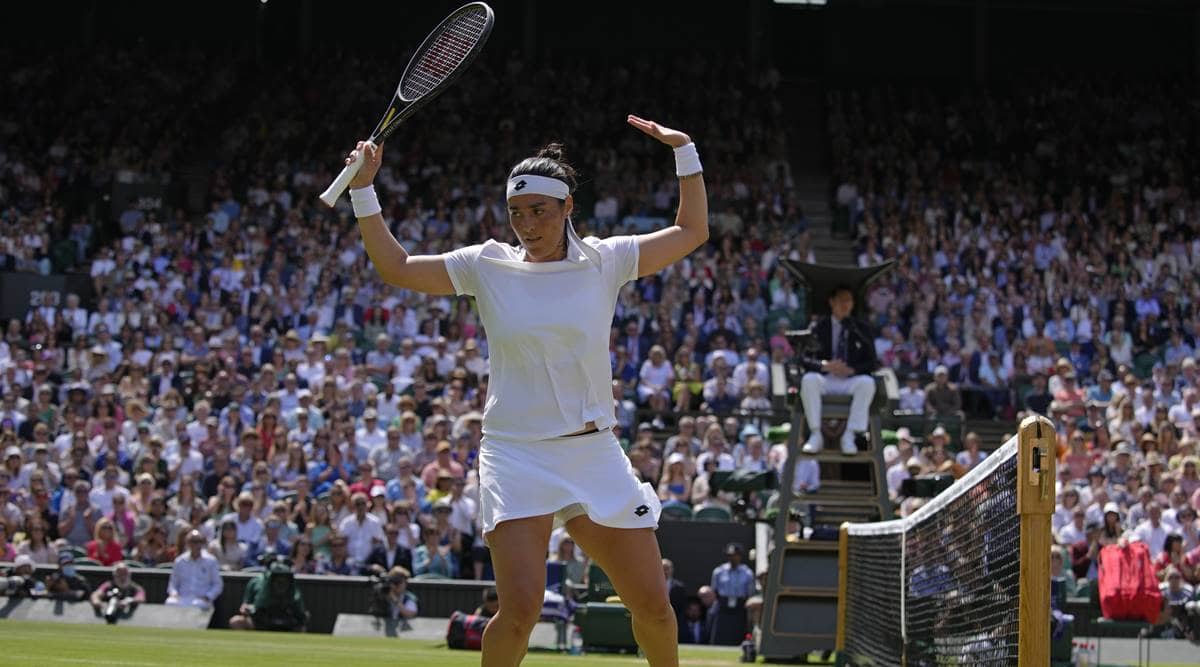 Tunisia’s Ons Jabeur holds up her hands to show that she avoided touching the net after making a return to Germany’s Tatjana Maria in a women’s singles semifinal match on day eleven of the Wimbledon tennis championships in London. (AP Photo/Kirsty Wigglesworth)

Jabeur’s own struggles had begun as early as when she was 13. She moved to the capital Tunis, and lived away from her family. I studied and played tennis at the same time (in Tunis). It was kind of a challenge for a 13-year-old to be far away from home… and tough to be waking up at 5am, practicing and staying there until 8 or 9 at night. They were very challenging moments, but I think I had to go through that to be able to become the person I am today,” she told the Olympic channel. The first African and Arab tennis player to break into the top ten lived a nomadic life, pursuing her dream on her own.

Things turned in 2017, when she broke in to top 100. The International Tennis Federation (ITF) awarded her $50,000 from their grants to players from smaller tennis nations.

“It was really important for me to be able to pay my staff, to pay a coach. You know, tennis is expensive and you need a lot of money to travel. I’m still grateful for this fund from the ITF and the way they helped me. I mean, I’m honestly so grateful for that. It was like an amazing year for me, playing without stress about the money. I could play stress-free… I felt stable. I was able to really play a lot of great tournaments.

“The young generation is much more motivated. I can see back in Tunisia, I can see that there are a lot of young, talented players and I hope I can really inspire them. And one day I can share my experience and show them the way… and (how) not make the same mistakes as me.”

Tatjana Maria didn’t make mistakes; it was the WTA erring big time. She couldn’t believe that top women players would be against introducing a Ranking Retention policy for mothers, as WTA alleged they were.
“I don’t believe the WTA that it’s really the top players who are against it. Nothing changes for them, on the contrary. It would be equally beneficial for them if they have a child and want to come back. And the really big stars like Serena Williams get wildcards for the tournaments they want to play anyway if they’re absent for a longer period of time. However, the reasoning of the WTA makes no sense.”

She plans her training with fellow mothers on tour like Kateryna Bondarenko so that her first daughter Charlotte, now 8, can have company. Charlotte has taken to tennis in a big way, during the pandemic-break at home, where there is a tennis court, she would regularly hit balls with her mother – and with her father who is the coach of Maria. 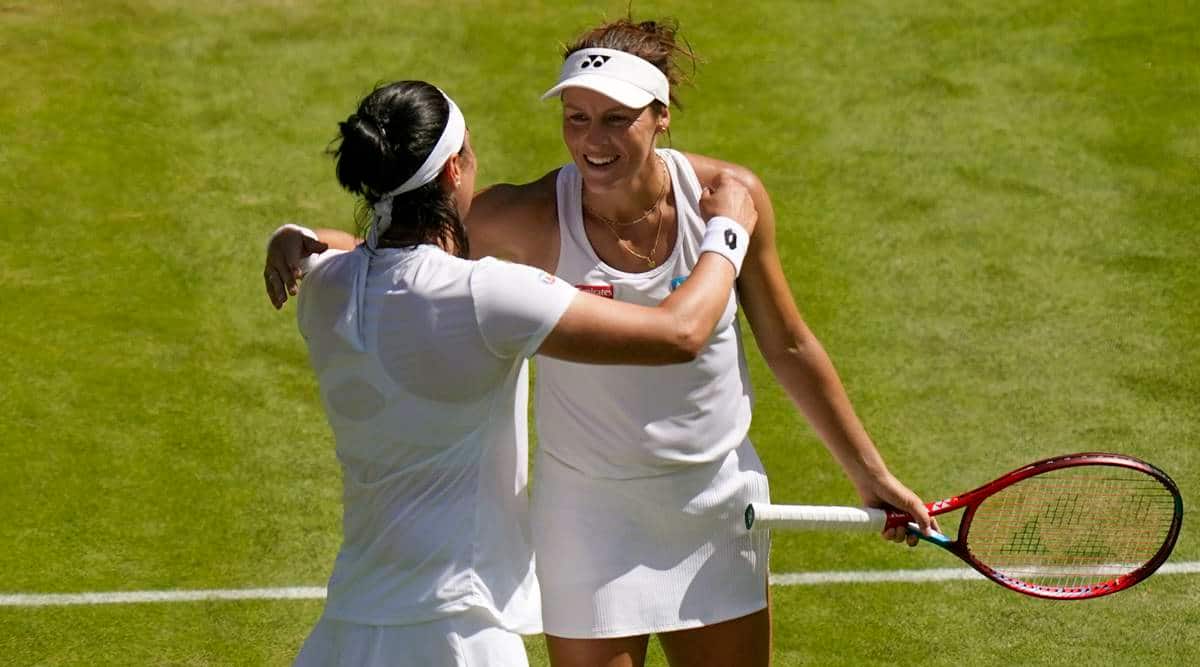 Tunisia’s Ons Jabeur, left embraces Germany’s Tatjana Maria after beating her at the end of a women’s singles semifinal match on day eleven of the Wimbledon tennis championships in London. (AP Photo/Gerald Herbert)

Charlotte, Maria says, loves travelling for tennis tournaments, playing the game with other kids. “She definitely wants it! (laughs) Charlotte always says: “I’ll be a tennis pro too!” She trains every day and plays really well. She even got a kit deal from Nike in Australia – that’s great of course! Meeting the top stars, standing on Center Court in Wimbledon, that’s normal life for her, she doesn’t know anything else,” Maria says.

A day before her semi-final against Jabreur, a reporter would ask her: Is it okay for her to talk about motherhood all the time? Wouldn’t she want to answer more questions as a tennis player?

Maria smiles. “I love talking about it. Being a mother to my two children is the most important thing in my life. That won’t change anything. I’m in the semi-finals of Wimbledon, yes, but I’m a mother first and foremost .”

Befittingly, the game itself would be a three-setter. Their individual games were perfectly captured at a point in the second set when Maria served 3-1 up on match point. Couple of lovely slices follow, from Maria’s forehand and Jabeur’s backhand, before Maria slices off backhand, deep down the line, and the ball would spin further away off the court. Jabreur runs back and across, fetches the ball from behind her shoulder, and somehow manages a forehand cross court past her friend. She would raise her left hand up, fist curled, and hold the pose.

At the end of the game Jabeur would say, “It was difficult running for her balls. She killed me. She has to make me a barbecue now for all the running I did on the court.” Maria would say, “It was her moment – after all this is the first time for her in a Grand Slam final, but she wanted to celebrate it with me. I hope she goes all the way.”