The 2022-23 season of the Indian Super League kicks off on October 7. Over the years, we have seen young players make their mark in the league and play an important role in their team’s success. Here are five youngsters to watch out for this season.

Sivasakthi Narayanan has been making his mark on Indian football for some time, but his performance in Durand Cup 2022 is what brought him into the spotlight. The 21-year-old scored five goals in the competition, including one in the final against Mumbai City FC.

Sivasakthi’s youth career started at the Raman Vijay Soccer School. He was the top scorer in the 2018-19 season of the Elite League, after which he joined Bengaluru FC’s B team. He played for Bengaluru B in the 2020-21 season of Bangalore Super Division and emerged as the top goalscorer with 15 goals, including two hat-tricks.

Sivasakthi received his senior team call-up in April 2021. He made his senior team debut against Maziya S&RC and scored just 10 minutes after being substituted. He was also a member of the Bengaluru FC team that took part in the Next Generation Cup 2022, scoring a second-half brace in his team’s 6-3 loss against Leicester City.

Two-time ISL champion Chennaiyin FC signed Jiteshwor Singh for the 2022-23 season. The 20-year-old defensive midfielder played over 1,500 minutes for NEROCA FC last season in the I-League — 12 league and five championship stage matches. Jiteshwor is known to be a solid presence in the middle of the park for his age, and his impressive performance for NEROCA won him the I-League’s Emerging Player of the Season award in 2021-22.

It is to be seen whether Thomas Brdaric immediately includes him in the starting XI, but with his signature the Marina Machans have bolstered their midfield arsenal. Team captain Anirudh Thapa, Edwin Vanspaul, Ninthoinganba Meetel and Vincy Barretto are some of the other redoubtable midfielders in the squad.

Ayush Adhikari is yet to play regularly for Kerala Blasters but the 2022-23 ISL season might just be the breakthrough season for the 22-year-old midfielder from Delhi.

Adhikari made 17 appearances for the Blasters. In those 17 matches, he made 50 blocks, 10 interceptions, four clearances and six blocks. Adhikari impressed in the U-14 Nations for Delhi and was selected for the ‘U Dream Football’ programme in Germany, where he spent almost four years of his life. 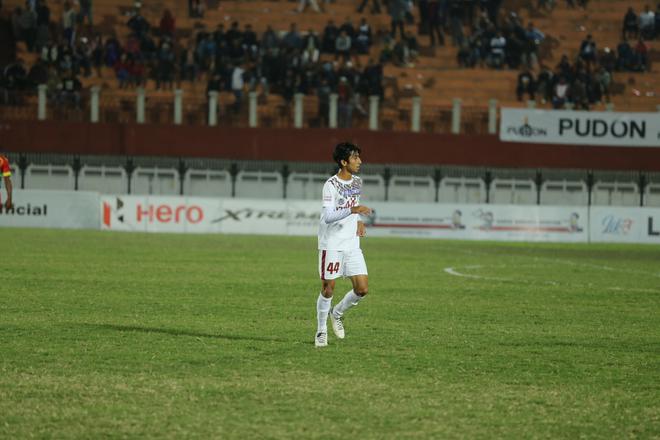 Twenty-one year old Kiyan Nassiri was a member of ATK Mohun Bagan squad in the recent Durand Cup. He scored a goal for the Mariners in the opening match against Rajasthan United.
| Photo Credit: AIFF Media

On his return, Adhikari signed for Ozone FC. In the 2018–19 Santosh Trophy, Adhikari finished as the tournament’s top scorer with six goals despite the fact that his side failed to make it to the knockouts. Adhikari was made captain of the Blasters reserve team in April 2022 and under his captaincy, his team finished runner-up in the Reliance Foundation Development League and qualified for the NextGen Cup in the United Kingdom. He captained his side there as well.

Lalchungnunga, who played for Sreenidi Deccan last season, will this season play for East Bengal.

The 21-year-old defender was one of the best players in the 2021-22 I-League: in 17 appearances for Sreenidi, including 14 starts, he scored a goal and made five assists. Having made a mark for the Red and Gold brigade in this year’s Durand Cup, he will be an important member of East Bengal’s defensive line-up. What makes Lalchungnunga such a valuable asset is that he is not only a sturdy presence in the backline, but a good ball-carrying who can contribute in building attacks from the back.

Kiyan Nassiri, son of football legend Jamshid Nassiri, made headlines when he came off the bench last season to grab a hat-trick against East Bengal in the Kolkata derby. By doing so, the 21-year-old became the youngest player ever in the league to achieve the feat.

Kiyan has mostly featured for the Mariners from the bench but has shown his ability with the ball. His pace makes him a tricky opponent for opposition defenders. Kiyan was included in the 22-member ATK Mohun Bagan squad for the 201 AFC Cup ahead of the team’s inter-zonal semifinal match against Uzbek side FC Nasaf. He made his senior debut for the club against the same. In the 2022-23 Durand Cup, he was a part of the ATKMB squad and even scored a goal in his team’s opening match against Rajasthan United but lost the match 3-2. Given his impressive performances and skill on the ball, we can expect Nassiri to start matches for the Mariners in the upcoming ISL season.