Here are all the major developments in Indian sports on Thursday, October 13.

The trio of Naamya Kapoor, Vibhuti Bhatia and Esha Singh won the Junior women sports pistol team bronze by outplaying Germany 17-1 in the World Championship in rifle and pistol in Cairo, Egypt, on Thursday.

China and Korea proved too strong in running away with the gold and silver.

Sharvaanica A.S, a budding chess player training at Hatsun Chess Academy, emerged as the U-7 national champion in the MPL 35th National Under-7 Open & Girls Chess Championships 2022 held in Ahmedabad.

She has won all her games and scored a perfect 11/11. Sharvaanica hails from Udayarpalayam, a small village in Ariyalur district.

The national championship tournament is conducted under the aegis of the All India Chess Federation (AICF) and is organized by Gujarat State Chess Association in collaboration with The Gujarat Council of Science City.

Over 100 players from all over the country participated in the event.

Sharvaanica, after her victory in the U-7 TN state championships, represented Tamil Nadu in the national championships. She will now have the oppurtunity to represent the country at the upcoming U-8 world championship for girls.

Indian Grandmaster V. Vishnu Prasanna, head coach of Hatsun Chess Academy, said, “Sharvaanica A.S has put in lot of effort. She is meticulous and extremely sincere with all the training that we are offering here at the academy. We will continue to identify such rare talents from rural background and offer them a platform to reach great heights.”

The Ladakh Football Association (LFA) will host the second season of the India Khelo Football trials in Leh and Kargil for U-13 to U-17 boys and girls between October 23 and 25.

The first season of the trials (2020-21) were also held in the same cities with around 200 participants.

“We are again going to Ladakh to scout talent, who will perform in front of ISL (Indian Super League), I-League clubs, and international scouts and agents, if selected for the National Finals. A few selected kids will also have a chance of winning trials in Europe, free of cost,” India Khelo Football said in a statement.

India Khelo Football aims to bridge the gap between grassroots talent in the country to the professional football ecosystem. During the first season of the National Finals at the Ambedkar Stadium in Delhi, more than 104 finallists performed in front of ISL, I-League, and international scouts, out of which more than 20 were selected for trials by ISL & I-League clubs. Moreover, seven finallists are gearing up for trials in Spain. 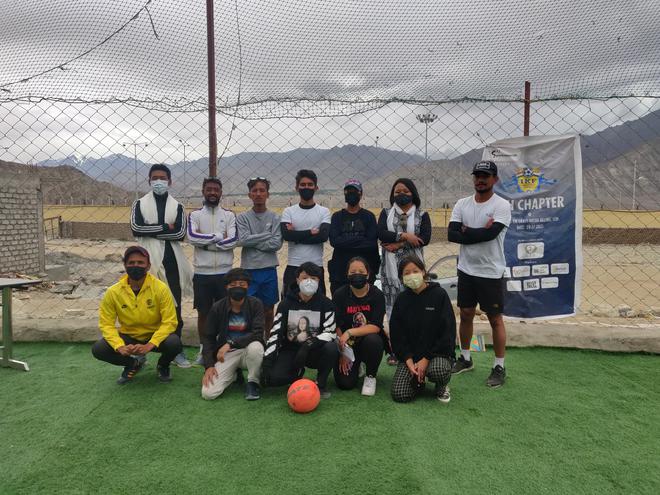 The first season of the trials (2020-21) were also held in the same cities with around 200 participants.
| Photo Credit: SPECIAL ARRANGEMENT