The domestic season of Indian Football starts with the Durand Cup on August 16, as East Bengal plays ATK Mohun Bagan in the opening match at the Salt Lake Stadium.

The 2022-23 domestic season will be longer than its preceding season. It begins with the Durand Cup in August. It will be followed by the Indian Super League (ISL).

Post the ISL, a Super Cup has been scheduled where 11 ISL clubs and 9 I-League clubs will play between April 1 and May 14.

A stark difference between the 2022-23 season and the preceding season is the increase in the number of competitions and the number of matches the players will be involved in, keeping AFC’s regulations in mind, which allows ISL clubs to play minimum 27 matches to gain eligibility in the AFC Champions League.

Unlike the 2021-22 season where the football calendar was very disjointed, the extended format of the 2022-23 season is being seen as a welcome change.

The Durand Cup will begin on August 16 with the Kolkata Derby between East Bengal Club and ATK Mohun Bagan at the Vivekananda Yuva Bharati Krirangan (Salt Lake Stadium) in Kolkata. 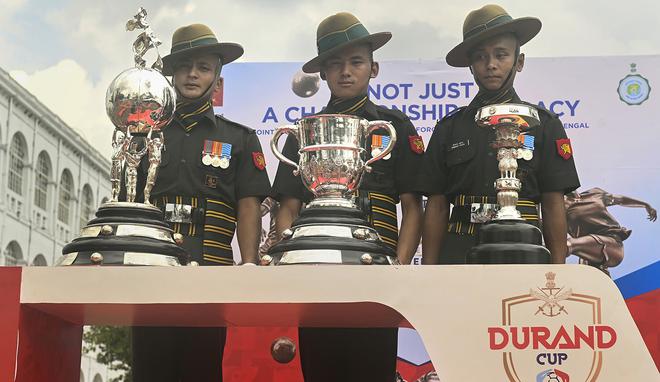 Army personnel pose for photos during the ‘Trophy Tour’ of Durand Cup 2022 at the flag off ceremony ahead of its 131st edition.
| Photo Credit: PTI

Apart from the Salt Lake Stadium, the Kishore Bharati Krirangan in Kolkata, the Naihati Stadium in the North 24-Parganas district of West Bengal, the Indira Gandhi Athletic Stadium in Guwahati, and the Khuman Lampak Stadium in Imphal will also host the 131st edition of the Durand Cup.

The wait is finally over; the Nation is ready to behold the 131st edition of the magnanimous Durand Cup. Witness for the first time, a new history being created, on an unfathomable scale. Catch us live this year, with 20 football teams hustling together in 3 football-crazy venues pic.twitter.com/HA6TxTS2Cx

The group stages will continue between August 16 and September 5. Dates for the knockout phases are yet to be finalised.

The ISL is supposed to return to the earlier round-robin format where teams will play home and away matches. For two seasons, because of the pandemic, the league was held inside a secure bio-bubble in Goa. The team with the most number of points will win the League Winner’s Shield.

The playoffs qualification process is reportedly supposed to undergo a change. According to the new format, approved by the ISL technical committee, the top two teams will automatically qualify for the playoffs like usual.

The single-leg match will be hosted at the home stadium of the higher-ranked team. The final four format does not change with games being played home and away.

Indian club participation in AFC Competitions- how will it work out?

The ISL shield winner of the 2021-22 season, Jamshedpur FC, will contest the Shield champion from next season in a playoff match to decide the group stage spot of the AFC Champions League 2023-24 season.

The winner of the Super Cup next season will face I-League winner Gokulam Kerala to decide this particular berth.