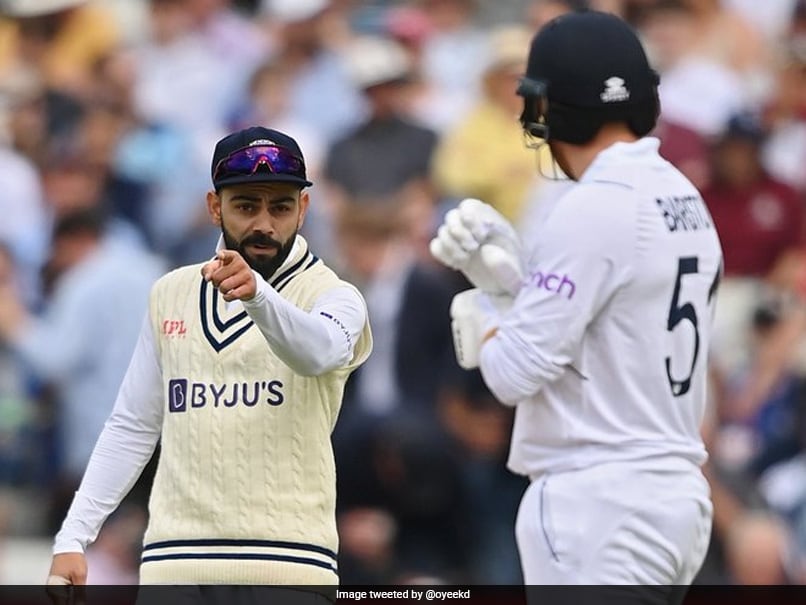 In the ongoing Edgbaston Test between India and England, the visitors are on top after scoring 416 runs in the first innings and then the taking five wickets with England’s score reading 84 at Stumps on Day 2. On the opening two days, rain played spoilsport and both days saw stop-start action. However, Day 3 started on time and the proceedings got off to a fiery start as Virat Kohli and Jonny Bairstow were involved in a feisty exchange.

The cameras caught Kohli first walking up to Bairstow signalling him to stand in his crease and the former India skipper was then seen making hand gestures. He was then seen gesturing Bairstow to stay quiet.

It’s tense out there between Virat Kohli and Jonny Bairstow #ENGvIND pic.twitter.com/3lIZjERvDW

After England captain Ben Stokes was then seen having a word with Kohli, the star India batter approached Bairstow with a big smile and gave him what looked like a friendly punch on the arm.

On Day 2 of the ongoing Test, Kohli and Bairstow were seen walking off together during one of the rain breaks, with both players having a laugh.

In the first innings, Kohli scored just 11 before being dismissed by Matthew Potts.

India went on to score 416 after centuries from Pant and Jadeja, with Anderson taking five wickets for England.