Mizoram is also about football.

The state has a little over a million inhabitants, making it one of India’s least populous states. But over the last decade, Mizoram has produced an abundance of footballers who have excelled for clubs and country.

But why so many footballers come from Mizoram is the question.

“In Mizoram, everybody wants to be a footballer. Here, life revolves around football. They are products of the state’s robust infrastructure developed over the last few years,” says Lalrindika Ralte, a former attacking midfielder with Churchill Brothers and East Bengal.

“We have grassroots football, then we have residential academies run by the state government. A batch of 20 players trains there for two years. I was appointed a coach at the U-14 academy in Saidan, Kolasib, from 2017 to 2019. After two years, our boys won the Subroto Cup. Some of these boys later joined the U-18 sides of MPL, while others went to the U-17 academy in Lunglei for further training or were scouted by academies in Chandigarh, Hyderabad or Bangalore. The government maintains rotation policy, so, now I am in Aizawl, training grassroots girls at the Rajiv Gandhi Stadium,” says Manuni, who holds an AFC C license for coaches. At the turn of the century, Mizoram’s Shylo Malsawmtluanga, fondly called ‘Mama’ by fans, was signed by East Bengal in 2002. Shylo was the first player from the state to receive formal training at the Tata Football Academy. A year later, Shylo, a winger, scored a right-footed volley against Mohun Bagan in a Kolkata Premier Division derby. He was also part of East Bengal’s historic ASEAN Cup win in Jakarta.

His exploits in the Red and Gold jersey made him a household name and a role model.

Football was a popular sport in Mizoram even in the early 2000s – Aizawl’s Holy Heart School won the Subroto Cup U-14 title in 2002 and 2003. Since then, Mizoram schools have won five more Subroto Cups. But the infrastructure was few and far between.

Samson Ramengmawia, a former defensive midfielder with Shillong Lajong and later Mohammedan Sporting, credited the transition to a change in mindset and an increase in the number of tournaments.

“When I started playing in Aizawl, I had not received any coaching. I got proper coaching when I joined Shillong Lajong when I was 17. My parents didn’t want me to play football; they wanted me to study. We only had an Independence Day tournament and inter-district matches back then. Now, parents encourage their children to learn and play football, and we have several tournaments. This is a big difference between two generations of parents,” says Samson, a former Grassroots Development Officer with Mizoram Football Association (MFA).

Hailing from the Lunglei district, Ralte had a different experience while growing up. “I started to play when I was seven, and football was a natural choice for me, as our district FA was active. We have football in villages and schools. I was scouted for the Indian Football Academy (IFA) academy from a school tournament in 2004. While growing up, I played on small and uneven grounds for my local club Electric Veng in age-group tournaments. Now children play on astroturf under trained coaches, whereas we had no coaches. I learned football watching Brazil’s Ronaldo and [Ruud van] Nistelrooy,” says Ralte. 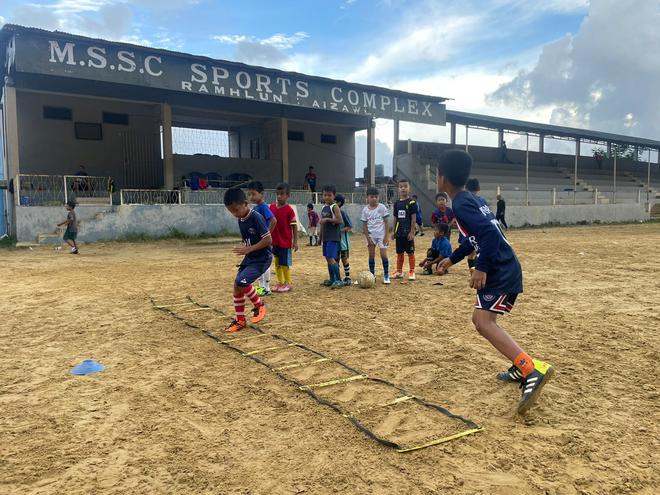 Few states in India are as heavily invested in football as Mizoram.

The seed for this prodigious growth was sown at the onset of the last decade when four institutions – MFA, Zonet, the state’s largest broadcaster, Mizoram State Sports Council (MSSC), and Tata Trust – stepped up to modernise the football infrastructure.

In 2012 MFA and Zonet signed a landmark agreement to launch an eight-team four-month-long Mizoram Premier League (MPL), a first in the state’s history.

Around the same time, All India Football Federation (AIFF) rewarded Manipur Football Association (MFA) with a grassroots football project – initially sponsored by FIFA Grassroots Programme. The project was a quick hit –parents welcomed it; children loved it. Assam Rifle Ground, famously known as Lammual – situated at the heart of Aizawl city – was the epicentre of the programme. 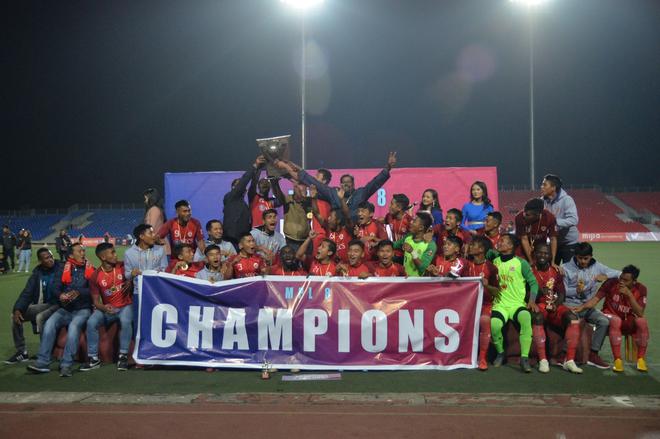 The Mizoram Premier League has been key to the visibility of Mizoram players for scouts in the ISL and I-League.

“Mizoram was the first Indian state to avail of the FIFA-sponsored grassroots football project in 2012. The objective of the project was to develop football culture in communities by imparting training to children. For that, FIFA provided kits to children and helped MFA set up grassroots centres. The local coaches received training from Australian coach Scott O’Donell. The result is evident: a culture has developed and the state is now a cradle of football,” says AIFF general secretary Shaji Prabhakaran, who was at the forefront of the project as the FIFA Regional Development Officer.

Sharing the hands-on experience of what goes on at the centres, Vishal Jaishi, an Aizawl-based grassroots coach, says, “We impart basic training, help kids pick up skills and become fit, dividing them into seven age groups – six, seven, eight, nine, 10, 11, and 12. Not all of them are talented, but the number of talents we unearth after each three-month-long course is huge.”

In 2016, MSSC and Tata Trust signed an agreement to make grassroots football available in rural areas where over 1000 children train under licensed coaches.

“We have 60 grassroots centres across the state’s 11 districts. Not all of them have astroturfs. The grounds belong to either the government or the communities. Each facility has 18 children aged between six to 13. They train throughout the year, thrice a week under a licensed coach. We provide them with kits and football,” says Malsawma, Tata Trust’s point person for the project.

“In the beginning, only Aizawl kids could avail the AIFF-MFA facility. Now we have made grassroots football available in every district. Tata Trust is sharing the cost with us. Village kids train under professional coaches and have access to proper pitches and equipment. 30 new astroturf grounds are coming up taking the state’s number to 40,” says sports minister Robert Romawia Royte, who also owns local club Aizawl FC.

The availability of synthetic turfs is a boon for football in the region, which has a long rainy season.

The MFA is adding one more residential academy in Sairang to complement the two already present in Kolasib and Lunglei. There’s also a collaboration plan between MFA and Samagra Shiksha to launch a football programme in schools.

The state now has several tournaments for all age groups and genders.

“Mizoram has MPL and Futsal for the seniors, followed by a league for the second and third division. Then all 11 districts have their own leagues. We have U-18 MPL, and U-15, U-17, and U-21 tournaments for both boys and girls. Then a tournament for senior girls. We also have inter-village, Baby League, and I-Day Cup events,” says Lalnghinglova ‘Tetea’ Hmar, the honorary secretary of MFA and an AIFF executive committee member. The state now has several tournaments for all age groups and genders.

Mizoram won the Santosh Trophy in 2014, the second North Eastern state to win India’s national football championship after Manipur in 2002-03. The Mizo boys also won the National Games gold in 2015, beating Punjab 1-0 in the final.

Two years later, there was further evidence of Mizoram’s steady rise when Aizawl FC won the I-League – the then top tier of Indian football – in 2017.

At the regional level, Mizoram is a three-time Dr T Ao Trophy champion – the football championship for the seven North Eastern states. Mizoram’s most recent triumph came in 2020.

A decade has passed since the system got a facelift. “Unlike the past, when most players came from Aizawl and its outlying areas, now district players dominate the state team during national tournaments,” says Lalbuliana, the state youth coach.

Only one player from Aizwal – Lallungmuana – was part of the Mizoram team that defeated Kerala 5-1 in the Khelo India Youth Games final in June.

While the grassroots programmes have ensured a conveyor belt of talents, MPL has brought Mizoram’s talent pool to the forefront. Last season, 16 of the 27 ISL players from the state were directly scouted by ISL clubs from the MPL.

This year, Bengaluru FC, Hyderabad FC, and Chennayin FC scouted fresh talents from ground zero, while Minerva Academy has picked 12 boys in the last two years as part of its ‘2034 World Cup batch’.

“The state has Baby Leagues for various ages. When you have Baby Leagues, the kids are technically sound. We (Minerva Academy) are trying to find them at the right age and put them through rigorous physical exercise. As they are already technically good and physically acrobatic, our coaches make them tactically good,” says Ranjit Bajaj, owner of Minerva Academy.

“Mizoram’s economic foundation is not great. There are no new jobs. It is one of the reasons why parents push their children to football. Finding jobs is tough here, and even if you get one, your earnings would be lower compared to bigger cities. This forces Mizos to see football as a career option. Right now, around 200 players are playing in various leagues and institutional sides like Services and Railways,” says Lalzarzova, a journalist with Mizo daily Vanglaini.

Football in Mizoram, however, is still running on shaky ground. The league’s financial health is as fragile as the state’s soil – prone to landslides. Even though the sport has made rapid progress, it failed to capitalise on its popularity.

The broadcaster Zonet, which owns the commercial rights of MPL, didn’t make any profit since the league started a decade back.

The pandemic and the Mizo National Front (MNF) government’s anti-liquor policy dealt further blows to the broadcaster. Tata Trust, which started a residential academy in April 2018 in Aizawl, shut down its operation in 2020 because of the pandemic.

“When we started MPL, we didn’t know about the consequences. It is a success for football, but the league is a loss making. Previously we had liquor companies like McDowell’s as sponsors. But Mizoram became a dry state after MNF came to power in December 2018. So, all those liquor companies are gone. We pay Rs 30,0000 to MFA every season as per the agreement. All stakeholders need to sit and find out a concrete solution,” says Zonet director Tato Lalthantluanga.

Tetea too acknowledges the financial difficulties. “We have developed infrastructure, but that is not enough. We are lacking sponsors and funding. Without sponsors, we often struggle to increase the length of our tournaments,” he says.

Football stopped in December 2020 due to the pandemic. Action resumed with the MFA’s Inter-Village Championship – a 204-team knockout tournament of 700 players – in July 2022.

But with ISL and I-League clubs making a beeline to sign players, local clubs lost out on good players and the chance to earn transfer fees.

“The MPL is a semi-professional league, it has eight clubs. Each club has a 20-member squad, before the pandemic 160 players were getting a monthly salary. That salary was not huge. Some big players earned Rs 50,000 per month while uncapped players got Rs 10,000-15,000. Post-pandemic the MPL season nine has started (on September 7) after a gap of two years, but the MFA has set the highest salary cap at Rs 15,000. Youngsters might end up earning nothing,” says Lalzarzova.