Host India have been drawn with England, Spain and Wales for the 2023 FIH Men’s Hockey World Cup at the Convention Centre in Bhubaneswar on Friday. 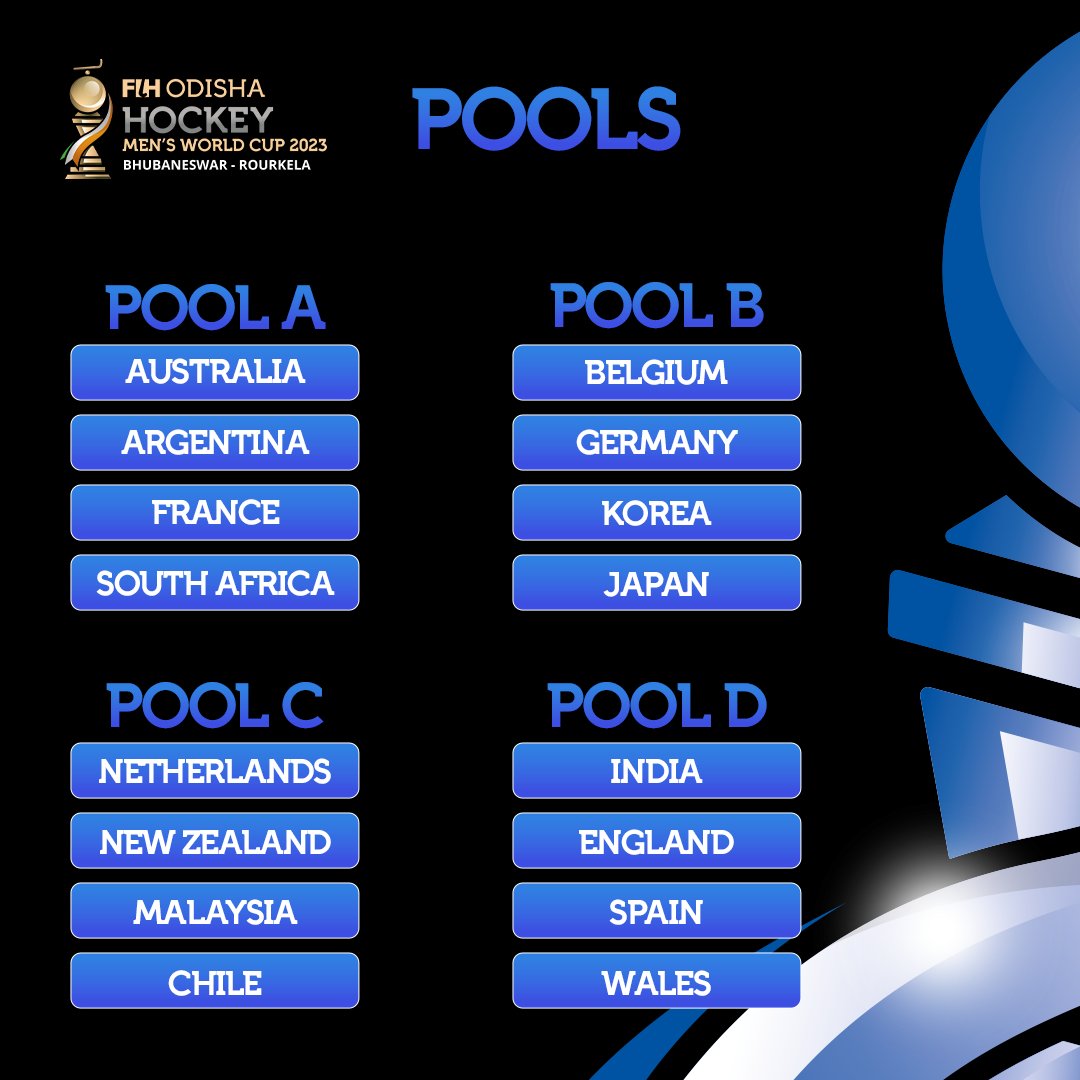 Pool C will feature the finalists from the last edition, the Netherlands (world ranking 3), at the head of the group. They will come up against the other Oceania’s representative New Zealand (world ranking 9), Malaysia (world ranking 10), playing their ninth World Cup, and newcomers Chile (world ranking 23), participating for the very first time in a FIH Hockey Men’s World Cup.

In Pool D, hosts India are the highest ranked side (world ranking 5). They will face England (world ranking 6), which they’ve recently met at the Commonwealth Games Birmingham 2022 for a thrilling encounter (4-4), two-time silver medallists (1971, 1998) Spain (world ranking 8) and Wales (world ranking 16), who, like Chile, will play their maiden World Cup.

Hon’ble Chief Minister, Government of Odisha Shri Naveen Patnaik said: “We are always very proud to welcoming the best hockey teams and players of the world for such an outstanding event. This time, the appetite is even bigger since, on top of our magnificent Kalinga Stadium in Bhubaneswar – where so many wonderful sports stories have already been written – we are inviting the world to a brand-new arena, namely the Birsa Munda Hockey Stadium in Rourkela. This new stadium is a further testimony of our strong commitment towards hockey. Congratulations and best wishes to all teams!”

FIH Acting President Seif Ahmed said: “We can’t wait to see the best teams in the world in action in the new “jewel” of hockey, the Birsa Munda Hockey Stadium in Rourkela, which, alongside the iconic Kalinga Hockey Stadium in Bhubaneswar, will play host to the 2023 FIH Odisha Hockey Men’s World Cup. I wish to renew our sincerest thanks to Hockey India and to the State of Odisha for hosting the 15th edition of this World Cup. With their commitment, experience and passion, you can expect nothing else but an amazing event coming our way in 4 months time! I wish already the very best of luck to all participating teams and officials, and invite all fans to tune in early next year: an unforgettable hockey show is awaiting you!”

Belgium are the defending champions of the previous edition, played in 2018, Bhubaneswar, with the Netherlands finishing second and Australia in third.

Read all the Latest Sports News and Breaking News here