When Erling Haaland, making his Champions League debut for Manchester City, scored his second goal against Sevilla, it was his 25th of the competition. Last year, the Norwegian had faced the same opponent in the round of 16 of the competition and scored two goals in each leg.

Since his move to Man City this summer, he has taken little time settling in and has 12 goals to his name in just seven matches for the defending Premier League champion.

Football transfers were anticipated to suffer a blow owing to the Covid lockdowns.

The 2022-23 season summer transfer window — the first after the repercussions and buffers of the pandemic — nullified any such fears with estimated spending of EUR 4.5 billion in one window across five leagues.

The Premier League — as it has over the past five years — dominated the market and saw the arrival of several big-money signings, such as Antony (from Ajax to Manchester United), Darwin Nunez (from Benfica to Liverpool) and Haaland from Borussia Dortmund to Manchester City.

Haaland joined Manchester City in June for £51.5 million and is expected to fill the void of Sergio Aguero — City’s legend and its highest goal-scorer of all time — who left the club in May last year.

Though Pep Guardiola, City’s manager played without a conventional striker for a season, the lack of one was evident in the Champions League — a competition where Haaland is breaking records quickly.

How good has Haaland been since his move to Man City

Haaland is the first Manchester City player to score on both his Premier League and UEFA Champions League debuts for the club.

Haaland is the first player in Premier League history to score nine goals in his first five games and holds the record for the most goals in a player’s first five appearances in the following competitions: Premier League (9 goals), Bundesliga (8 goals).

His eight goals in his first five Champions League appearances is second only to Sebastien Haller (9).

Only 31 players in Champions League history have scored more goals than Erling Haaland, who is playing his 20th game in the competition.

Haaland’s goal tally (25) in the first 20 UCL appearances broke the record of Dutch forward Ruud van Nistelrooy and Spaniard Roberto Soldado, each of whom had 16 goals. 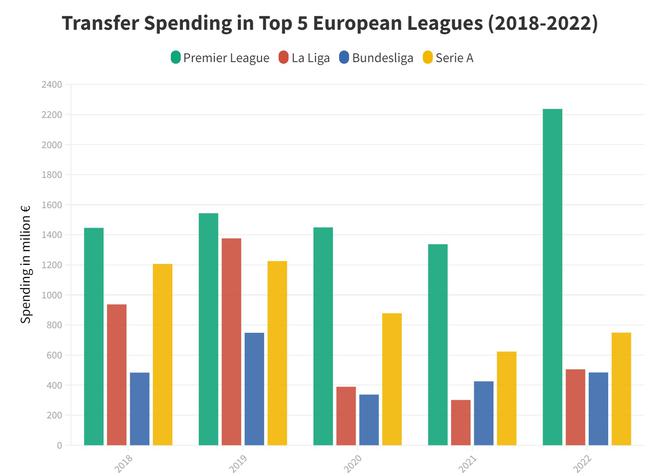 Haaland has scored 10 goals in his first six Premier League appearances for Manchester City. He is the joint-fastest to 10 goals in the competition’s history, alongside Mick Quinn who did it in December 1992.

Gabriel Jesus, the striker with 95 goals for Manchester City was allowed to leave as City latched on to Haaland. The Brazilian joined Arsenal in a £45 million deal.

Reuniting with Mikel Arteta — who served as assistant coach of City from 2016 to 2019 — Jesus scored a brace in his Arsenal debut, against Nurnberg.

He has become the centre of the Gunners’ attack, with nine goals in 11 matches as Arsenal sits on top of the league table after six matches.

Tchouameni the next Casemiro?

Aurelien Tchouameni, who joined Real Madrid for £72m from AS Monaco as its fourth-most expensive transfer, has already become the lynchpin for Real in the midfield.

Brought in as an addition to Real’s midflield, Tchouameni has become a first team regular, either coming on as a mid-game substitute for Toni Kroos or Eduardo Camavinga, or playing as a solid defensive midfielder in front of the defensive diamond.

In the last season, nobody had more interceptions (101) in Ligue 1 and only Sergio Busquets (179) had won possession in the midfield more times than Aurelien Tchouameni (170) in Europe’s top-5 leagues.

Tchouameni’s instant impact since arrival has seen him make the defensive midfielder role his own. In his second La Liga game for Real (vs Celta Vigo), he had the most clearances (4), interceptions (3) and recoveries (9) of all his team’s players. Proving his worth: Aurelien Tchouameni, who joined Real Madrid for £72m from AS Monaco as its fourth-most expensive transfer, has already become the lynchpin for Real in the midfield.
| Photo Credit: AFP

The Frenchman’s prowess in the midfield was underlined with a brilliant performance against the then-table topper Real Betis. Tchouameni had 19 duels against Betis and won 16 of them.

Real Madrid has not lost a single match with him starting and he has earned an assist within his first three matches for Los Blancos.

Casemiro, on the other hand, has struggled to find regular game time so far, since his £70 million move to Manchester United. He was unveiled before the match against Liverpool and has made all his Premier league appearances from the bench (after six PL matches).

The only match he started saw United lose to Real Sociedad in its opening fixture of the Europa League.

The attacking shift of Liverpool, Bayern and Barcelona

The forwardline of Liverpool, Bayern Munich and Barcelona saw a major change this summer, with all the sides changing their No. 9s.

Bayern Munich’s second highest goal-scorer of all time, Robert Lewandowski, joined Barca for a fee of about £43 million and took little time to settle. It took him 46 seconds — in his second match in La Liga — to score on his birthday, the earliest goal in his Bundesliga and La Liga career.

In five competitive games for Barca, the Poland international has eight goals and he is only the third La Liga player to score five or more goals in his first four games in the competition in the 21st century after Cristiano Ronaldo in 2009 (5) and Radamel Falcao in 2011 (5).

The Pole started his Champions League campaign (for Barcelona) in style as well, scoring a hat-trick and becoming the only player to score so for three teams — Borussia Dortmund (1), Bayern Munich (4) and Barcelona (1).

Barca, which had Memphis Depay and Pierre-Emerick Aubameyang as its top two strikers last season, saw the latter leave for Chelsea weeks after Lewandowski arrived.

Mane scored on his debut for his new team, helping Bayern Munich to its first silverware this season — the German Super Cup.

He continued his scoring rate since, becoming the first player in 10 years to score in each of his first two appearances for Bayern in all competitions.

But his former side, Liverpool, however, has plummeted in attack after he left. In the Premier League, the Reds have won just two matches and lost to arch-rival Manchester United. At this stage last season, it had five wins in six matches.

Nunez — the former Benfica striker who joined Liverpool for an initial fee of £75 million (a club record) as a replacement for Mane — has scored just twice for the club in competitive fixtures so far.

To make matters worse, he was shown a red card in his first Premier League appearance at Anfield, the second Liverpool player to be sent off in such a manner after Joe Cole vs Arsenal in 2010. 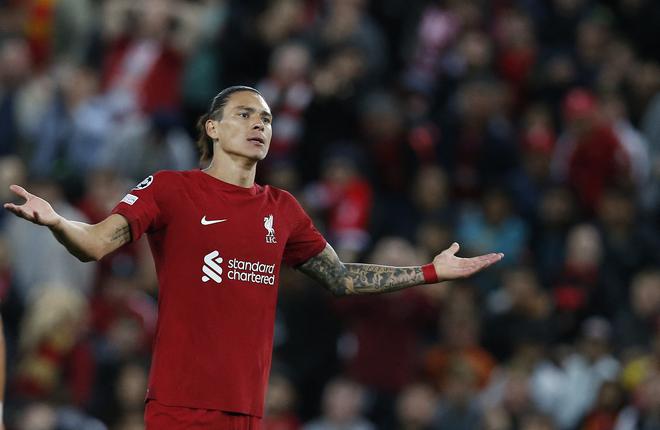 Slow start: Darwin Nunez, purchased by Liverpool for an initial fee of £75 million, has scored just twice for the club in the competitive fixtures so far.
| Photo Credit: REUTERS

Manager Jurgen Klopp did not start him in the Champions League in which Liverpool lost 1-4 to Napoli, with the Uruguayan drawing comparisons to Andy Caroll — another record signing for Liverpool, who had failed to make a mark, scoring just 11 goals in 58 appearances.

Antonio Rudiger left Chelsea for free at the end of last season and Thomas Tuchel brought in two centre-backs — Wesley Fofana (£70 million) and Kalidou Koulibaly (£34 million) — to strengthen the defence.

However, seven games later with 10 goals conceded, Chelsea gave marching orders to Tuchel, leaving an uphill task for the new arrivals to improve the defence of the London-based club.

Defensive changes happened in another Premier League side — Manchester United.

The Red Devils signed Ajax’s Lisandro Martinez who arrived at Old Trafford for a fee close to £57 million.

Lisandro had completed more passes per 90 minutes than any player to play more than 10 times in last season’s Eredivisie (82.3), while he also boasted the best aerial duel success rate of any player to contest more than 100 aerials in the 2021-22 competition (70.2%).

The Argentine impressed in United’s 2-1 win against Liverpool and has paired up with Raphael Varane to become a formidable duo at the back. United has not lost a match (in the first six Premier League matches) when the two have started, including wins against Arsenal and Liverpool.

With most passes completed, ball recoveries, clearances, blocked shots, and joint-most interceptions among all United players, Lisandro won the team’s Player of the Month award in August. While the summer window saw billions of dollars involved in transfers, only time will tell whether the million-dollar players can justify their worth, especially with the FIFA World Cup 2022 just two months away.