Welcome to Sportstar’s live coverage of the FIFA World Cup Group D clash between France vs Denmark. This is Nihit Sachdeva taking you through the action as it unfolds at Stadium 974 in Doha, Qatar.

Griezmann with the corner kick. Maehle at the far post puts it away for safety.

Foul by Andersen on Mbappe close to the Danish box. Free kick for France. Griezmann sends it in and Cornelius puts it behind for a French corner.

Excellent stuff from Mbappe to put Hernandez through on the left. Hernandez puts in the cross, cut back from the French player at the far post but Giroud in the centre fails to make any contact whatsoever with the ball.

Mbappe puts in the cross for Griezmann from the left but the Danish defence heads the ball away.

Varane with the ball at the back. The Manchester United defender is back in the national side after a muscle injury.

Dembele turns the defence into attack. Mbappe sets it up for Dembele at the edge of the box but Dembele’s shot is easily blocked by the Danish defender marking him.

Mbappe loses possession close to the Danish box who are now on the charge. Kristensen from the right wing tries to put Cornelius through but the ball goes past him.

Denmark has made four changes to its starting lineup from the match against Tunisia. France too has made a couple of changes, one of them being a forced one as Lucas Hernandez is ruled out of the rest of the tournament due to injury.

9:25PM – The two teams are out on the pitch for the national anthems. Live action begins shortly! 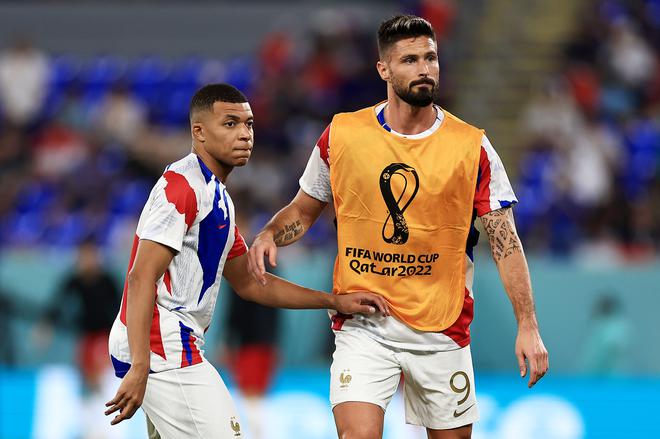 9:10PM – Earlier in the day, Australia beat Tunisia 1-0, which means France confirms round of 16 spot with a win over Denmark tonight.

9PM – Looks like there is no scope for surprise today.

3 – France will play their 3rd game against Denmark in 2022. This is the first time Les Bleus have played 3 matches against the same opponent in a calendar year since 1949 against Yugoslavia. Unusual. #FRADENpic.twitter.com/osgeGLI2aw

If France wins today, it would the first nation ever since Spain in 2010 to have won six consecutive World Cup matches.

8:20PM – ICYMI, here’s a recap of the matches played on Friday

Olivier Giroud will bid to become France’s all-time top scorer when it faces Denmark in Group D at the World Cup on Saturday, with ‘Les Blues’ looking for a victory that will take it into the round of 16 with a game to spare in Qatar.

Target man Giroud is level with Thierry Henry on 51 goals after scoring twice in the 4-1 win against Australia on Tuesday.

“Titi, I’m coming for you,” Giroud joked after the Australia game, during which he benefited from the impressive work of Kylian Mbappe.

While the defending champion got its campaign off to a convincing start there will be no complacency going into the match against Denmark. Didier Deschamps’ side lost its last two meetings with the Danes in the Nations League.

Attacking players Mbappe, Giroud, Antoine Griezmann and Ousmane Dembele all started against Australia but Deschamps may be tempted to take a more cautious approach on Saturday.

“We saw that there are no small teams in modern football. We saw it against Denmark,” said Dembele, his memory fresh from the two recent losses against the Danes.

In central defence, Deschamps might be able to call upon the experienced Raphael Varane as he continues his recovery from a hamstring injury while Theo Hernandez should start at left back after his brother Lucas was ruled out of the competition with a knee injury.

Denmark was held to a scoreless draw against Tunisia in its opener and manager Kasper Hjulmand said it would have to up the tempo against France.

“If you’re not speeding up against France, you’re probably in trouble … we must step up, but we are ready to do it, to find ourselves again,” Hjulmand told reporters.

“I wish the best of Ollie, but hopefully I have an advantage,” he said. “Ollie is also one of the best strikers in the box in my opinion, probably underrated as a striker.”

The Danes will be missing midfielder Thomas Delaney, who suffered a knee injury in the first half against Tunisia and has been ruled out for the rest of the tournament.

WHEN AND WHERE TO WATCH

When will the France vs Denmark match kick-off?

The France vs Denmark match will kick-off at 9:30PM IST, November 26.

Where will the France vs Denmark match kick-off?

The France vs Denmark match will kick-off at Stadium 974.

Where can you watch the France vs Denmark match in India?

The France vs Denmark match will be telecasted live on Sports18 and Sports18 HD. On Android and well as iOS, the 2022 FIFA World Cup will be live streamed on JioCinema.

Where can you watch the France vs Denmark match outside India?