This is an intriguing group with the European power­house, the Netherlands looking certain to sail into the knockouts. The Dutch are back after missing out the 2018 edition in Russia and would try to make their presence count this time.

Despite the legacy of being one of the most talented and ingenious teams in world football, the Dutch have so long flattered to deceive with three final appearances, but are yet to win the crown. With Louis van Gaal returning to the helm once more, the Dutch fans will be hoping that the celebrated manager will break the jinx this time.

The second spot from the group is likely to see an intense duel. The tournament will be a first for the host nation Qatar. Much like hosting the World Cup, the Asian champion can be expected to spring a surprise in reaching the knockout stages from the group where it needs to get the better of the much higher­-ranked sides like the Netherlands and Senegal.

Qatar’s opener against Ecuador will be the first big test of its true strength. The South American qualifier impressed everyone with its performance where it tallied the highest ever goal figures (27) to complete its qualification campaign.

Qatar needs to get its act together if it does not wish to be clubbed with South Africa as the second host to be eliminated in the group stage. 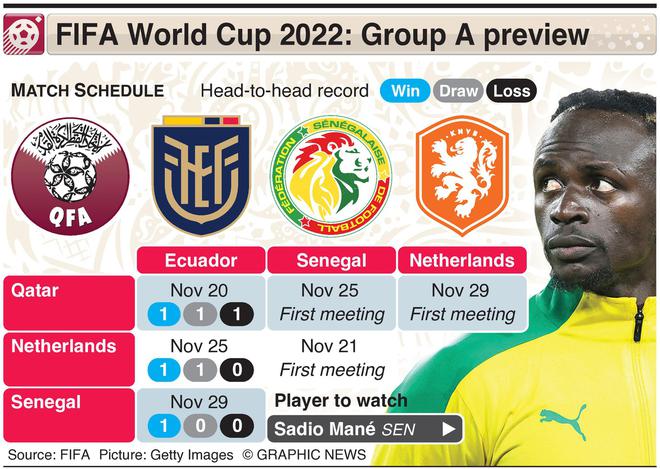 Since the 2018 disappointment, the Oranje have got together to reclaim their position as one of the top sides in world football. The Dutch have introduced the most dynamic formations of modern football but sadly have not been able to translate that into success at the highest level.

Van Gaal has returned as coach for the third time and the Oranje fans will be hoping that he finds the right recipe to give the Netherlands it’s first feeling of lifting the gilded Cup. The team has seen a remarkable turnaround under van Gaal, winning 11 and drawing 15 matches ever since he came out of retirement to take over the side in August 2021. The Dutch squad is a good combination of recognised names like skipper Virgil van Dijk, Daley Blind, Memphis Depay and exciting talents like Cody Gakpo who has 15 goals and 13 assists for PSG this season. With the group stage draw offering a relatively easier challenge, van Gaal may well be dreaming of helping the team in doing better than the third­place finish his side managed under him in Brazil in 2014.

The Africa Cup of Nations winner Senegal has a strong reason to believe in its strength and ability. Senegal is the only team in the new millennium to reach the World Cup main stage as the African champion. A number of Senegalese footballers play in the top teams of the European leagues and coach Aliou Cisse will have the benefit of packing his side with a sizeable arsenal to challenge any big team in the World Cup. Bouna Sarr who has undergone a surgery is out of the World Cup, while Sadio Mane is ruled out with injury.

Road to World Cup: Winner of CAF qualifiers third round

Still there is a lot of enthusiasm surrounding Senegal which has enough depth in the squad. With some bright talents helping the seasoned manager in finding the right combination, Senegal is expected to reach the next level of the competition. With Mane out injured, the African Lion will need Salernitana forward Boulaye Dia to bring his club form to the World Cup. Senegal has a lot of good aspects in its favour and the quarterfinalist of the Korea-­Japan edition in 2002, has the opportunity to emulate Nigeria of being the second African team to make it to the knock­outs for the second time.

The team oscillated between hope and despair in the last few months with Chile and Peru raising questions about the nationality of its player Byron Castillo.

Ecuador earned a big reprieve when the Court of Arbitration for Sport awarded the verdict in its favour with barely 12 days remaining for the tournament. Ecuador is the youngest team to qualify from South America and with Argentine coach Gustavo Alfaro having a nice blend of youth and experience under his command, it will be hoping to relieve its performance in 2006 when it reached the knockouts (for the only time). The Brighton trio of Pervis Estupinan, Moises Caicedo and Jeremy Sarmiento have to draw on their experience to help Ecuador go on a similar run

Making its maiden appearance in the FIFA World Cup as the first Arab nation to host the tournament, Qatar will be hoping to leave its impression with a memorable performance.

Qatar won the Asian Cup to embellish its claim ahead of the World Cup.

Playing under the stewardship of the Spanish coach Felix Sanchez for the last five seasons, Qatar is determined to put on its strongest performance ever. The newcomer has a strong squad and will be hoping to pick up some memorable moments while looking for some upsets on the way. The team, however, might pay the price for the lack of top­level football experience as the entire squad plays in the Qatar All­Star League.