The 2022 FIFA U-17 Women’s World Cup came to a rather exciting end at the DY Patil Stadium in Navi Mumbai. Spain retained its title in dramatic fashion, beating Colombia in the final with the help of a late own goal. A taste of the high standards of U-17 football and the buzz generated by the event were gains for the Blue Tigresses from the global event.

“Though we could not get the results we wanted, we are very happy for the support we got on and off the field,” India’s defender Kajal told Sportstar after the campaign.

“I want to play more international matches. I hope more girls will take up the sport and more parents will allow their daughters to play football,” she added.

The tournament was first held in 2008 and has seen the rise of several superstars of women’s football, including Ballon D’or winner Alexia Putellas. Dzenifer Marozsan, the Golden Ball winner in 2009, went on to become a five-time Champions League winner and a three-time women’s footballer of the year in Germany.

Some of the participants this year are already one the cusp of greatness.

Colombia captain Linda Caicedo had already played the U-20 Women’s World Cup before leading her country to its first-ever FIFA final (men or women) in the U-17 World Cup. She scored four goals, winning the bronze boot and the silver ball. Agudelo — the youngest member of the Colombia U-17 team — made the final save in sudden death to help her team make it to the final. Spain’s Vicky Lopez made four key contributions for her team and won the Golden Ball. The midfielder, who honed her skills at Madrid CFF and joined Barcelona this summer, saw club football helping her succeed at the international level.

Another standout performer was Germany’s Mara Alber. The Hoffenheim player turned out to be the architect in attack behind Loreen Bender (of Eintracht Frankfurt). The two contributed to 11 of their team’s 16 goals in the tournament.

Club football had groomed these players and its value hadn’t gone unnoticed. “I hope the [Indian] girls get into good football clubs,” stated head coach Thomas Dennerby after India’s run in the tournament ended.

The World Cup came at just the right for India and for women’s football globally.

It was a great first event to kick off the new All India Football Federation (AIFF) regime’s journey under president Kalyan Chaubey. The near-term future of Indian football seems promising: the AIFF has announced the National U-17 Women’s League and discussed the possibility of hosting more Asian Football Confederation (AFC) and FIFA events.

Women’s football globally is going through a purple patch: England played Germany in front of a sold-out Wembley Stadium in July this year during the European Championship, and as many as 91,000 people watched the semifinal of the Women’s Champions League between Barcelona and Real Madrid. There was so much interest in that game that tickets had been sold out two months before the match. 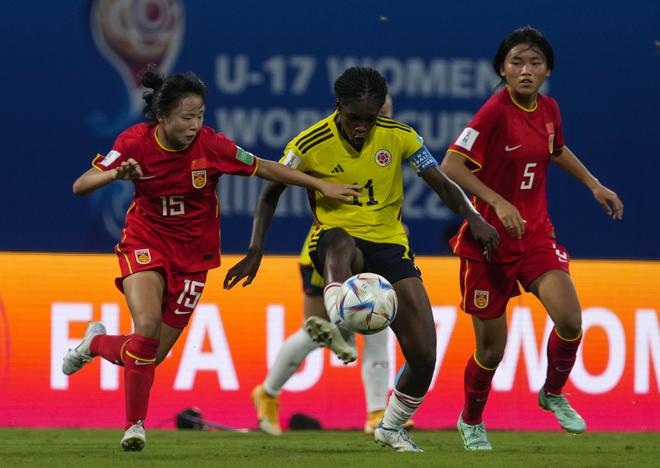 Match winner: Linda Caicedo (centre) fights for the ball with Yu Xingyue (left) during a World Cup contest between China and Colombia in Navi Mumbai. Caicedo scored four goals in the tournament, winning the bronze boot and the silver ball.
| Photo Credit: AP

That the Indian team had a long way to go to match the standards of the best teams became clear at the World Cup. It lost all its matches in the group stages, conceding 16 goals — the most number of goals in the tournament. The early elimination was a reality check for the Blue Tigresses and drove home the need for a better structure and a better infrastructure in women’s football.

In the team’s last press conference, Dennerby dwelled on the need for a long-term programme and for more exposure tours and matches.

“In a big country like India, it could be a good thing to have an AIFF Academy where we can have the best players — from the Under-17, Indian Arrows, Under-19 and the senior teams practising together, seeing each other and having role models,” he said.

“India has been a fantastic host. This makes me believe that you can do more in other competitions as well,” Infantino said, assuring that he will be back to the country next year.

“FIFA and AFC want to focus on India to host more future events, and over the last few years since I’ve taken over at the AFC, I think India has played a big role in Asian football,” added Ibrahim Al Khalifa.

The slogan of the World Cup was #KickOffTheDream. Fans and stakeholders of women’s football in India will hope their dreams really do kick off after this World Cup.