It was supposed to be a big year for women’s football in India. Two mega events were to get the ball rolling for the women’s game — the AFC Asian Cup, and the U-17 FIFA World Cup.

After Covid-19 forced fans to stay at home for a good part of 18 months, the Asian Cup was meant to leave them with something to celebrate. But the virus laid waste to the plans both on and off the field. The Indian team was badly hit, forcing it to withdraw from the tournament. The entire tournament was played behind closed doors.

ALSO READ – U-17 World Cup: After FIFA ban, light at the end of the tunnel for Indian football

Nine months have passed since then and India prepares itself to stage the U-17 World Cup. Barring the now-revoked FIFA suspension, which threatened to take away India’s hosting rights, everything went smoothly. The 2020 edition, which was scrapped due to the Covid-19 outbreak, was supposed be held in six cities, while the 2022 edition has been restricted to three cities — Bhubaneswar, Goa and Navi Mumbai.

It’s been five years since the All India Football Federation (AIFF) hosted the men’s U-17 World Cup, which launched an array of future stars for both the Indian national team and overseas. The 2017 edition broke the attendance record across 17 editions of the event, with the final witnessing over 66,600 people at the Salt Lake Stadium. 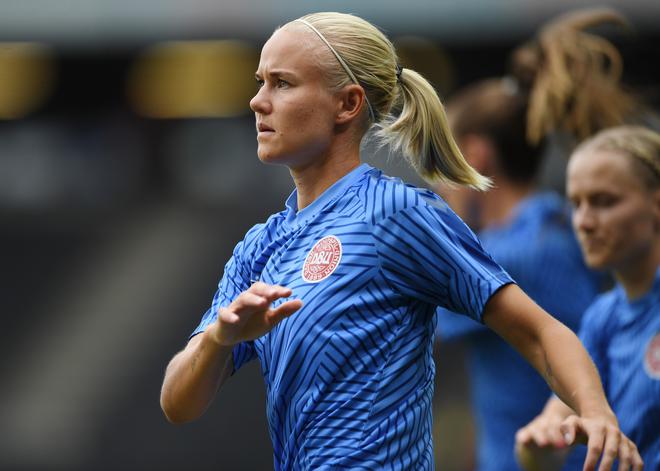 Superstar: Denmark’s Pernille Harder is one of the biggest stars from the U-17 Women’s World Cup. Harder held the record for the highest transfer fee for two years before it was broken last month.
| Photo Credit: Getty Images

The image of Jeakson Singh Thounaojam towering over the Colombians to head home a goal in front of a packed home crowd in New Delhi and of Dheeraj Singh in full stretch to restrict the damage of the opponents still linger in the minds of many. From the batch, eight have gone on to make their senior India debuts and are being moulded into the team’s core for the next decade. The 2017 champion, England, saw six players graduate to the senior side including the likes of Phil Foden, Jadon Sancho and Emile Smith Rowe.

The 2022 edition could prove to be a similar launchpad for the women’s game. Some of the previous stars of the U-17 World Cups include Denmark’s Pernille Harder (2008), Germany’s Alexandra Popp (2008), USA’s Crystal Dunn (2008) and Spain’s Alexia Putellas (2010). Harder held the record for the highest transfer fee for two years before it was broken last month, while Popp was the joint-top scorer at the EUROs this year. World Cup winner Dunn has over 100 caps for her national team and Putellas is the reigning Ballon d’Or Feminin.

ALSO READ – Will be hard to score against us: India women’s U-17 team head coach

“Both tournaments should be allowed their own spaces and one should not be compared to the other for validation or success in terms of impact or legacy,” said Nandini Arora and Ankush Arora, project directors of the Local Organising Committee (LOC) for the World Cup. Nandini and Ankush added that the legacy of the tournament will be more than just football, and they hoped that it stands for a ‘positive social change’. “Further, the grandeur of a major international tournament and the eyeballs it will bring to the women’s game is bound to improve the commercial of the game.”

The U-17 World Cup has also proved to be a testing ground for several coaches. Monica Vergara (Mexico), Futoshi Ikeda (Japan), Jorge Vilda (Spain) and Asako Takakura (Japan) have gone on to coach the senior national teams. The LOC and the AIFF have launched the Coach Education Scholarship Programme in which women are trained to become officially certified E-License and D-License football coaches, to tackle the dual issue of grassroots participation as well as women’s representation in football leadership. The tournament organisers have also launched ‘Kick off the Dream’ football carnival in April this year in the host States, aiming to reach 70,000 children and to normalise the concept of equal game and advocate for gender-inclusive participation from a young age.

Despite the 2020 edition of the tournament being cancelled, seven players from the team have already progressed to the senior Indian national team. Shilky Devi, Sumati Kumari, Mariyammal R, Priyangka Devi, Martina Thokchom, Astam Oraon and Kritina Devi have all been involved in the senior squad with six of them receiving senior caps. Unlike the men’s game, which has a four-five month long club football season for the youngsters to bed into senior football, there hasn’t been a natural pathway of progression for the women. The professional women’s club football season is in effect a month-long tournament.

It’s going to be a tough ask for the U-17 team to go up against Brazil, USA and Morocco but if it can manage to replicate a Jeakson or a Dheeraj or even go beyond and cause an upset, it can truly ‘kick off the dream’ for the women’s sport.