Colombia had started its World Cup campaign with a 0-1 loss to Spain and the South American side, which has not lost a game since, will look to settle scores at the same venue.

“Since we started our journey in the CONMEBOL U-17 Championships up until the World Cup, many of our players have been signed by professional teams,” Colombia’s head coach Carlos Paniagua said. “Now, we are here in the World Cup, and this is the first time we made it to the quarterfinals and have made history to make it to the final. We are ready and really happy to be here.”

In the semifinals, Spain knocked out Germany – the U-17 Women’s European Champion – with a 90th-minute goal from Lucia Corrales Alvarez.

La Furia Roja has regularly found late goals in the tournament, with all their six strikes coming after the hour mark and four coming in the last 10 minutes of play.

“It is just one more step to get to the title and we are ready for it,” said Spain’s head coach Kenio Gonzalo, “We have kept ourselves composed and calm so far and will go into the match thinking of it as business as usual.”

Colombia, on the other hand, has become the dark horse in a brave pursuit of World Cup glory. Las Cafeteras knocked out Nigeria in the semifinal – beating it 6-5 on penalties with a valiant Luisa Agudelo in goal.

Difference in style of play

While Colombia and Spain are both Spanish-speaking nations, their strategies in the World Cup have been different.

Spain builds up slowly, from the back, with Marina Rivas getting the ball to Vicky Lopez for runs up the pitch. Colombia, on the other hand, treads in quick transitions and counterattacks. 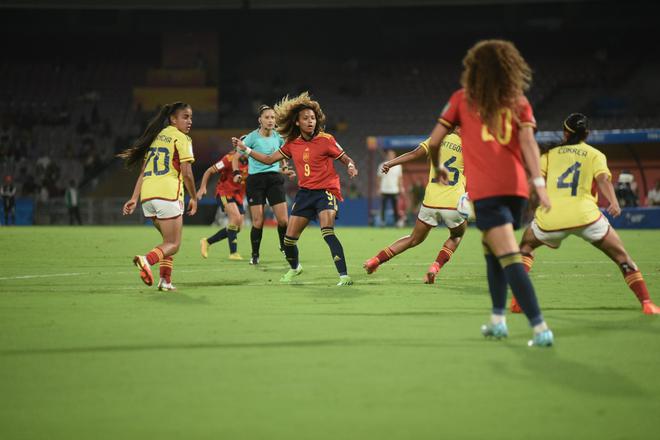 Linda Caicedo (No.11) and Yesica Munoz (No.9) have often switched positions, drawing out defenders and releasing the other, for a chance on goal – something that troubled Nigeria in the semifinal.

For Spain, though, the attacking options have changed in different matches (from Vicky and Jose Amezaga in the first two games to Carla Camacho later in the tournament), its shape has remained a conventional 4-3-3.

Vicky has run the show for Kenio’s side – making runs behind the defensive line, dribbling through centre-backs and at times, scoring the winner. She has played a part in four of Spain’s six goals – two goals, one assist and one key pass – and is its top-scorer in the tournament.

Colombia has experimented with shapes as well as forwards as it progressed in this World Cup. It started with a 4-3-3 shape against Spain, the only game it has lost here in India.

It went with a wider shape, a 4-4-2, with Yesica and Linda as the two attacking heads in the group stages. In the knockouts, Paniagua shifted to a narrower 4-3-2-1 formation, with captain Linda playing as the No. 10 and Gabriela Rodriguez, attacking midfielders behind the sole striker.

The 17-year-old – who won the best player at the Copa America Feminina – leads the race for the Golden Boot with four goals and will be Colombia’s player to watch out for.

The Spaniards have already demonstrated how to stop the Colombians, using zonal marking to freeze the South American attack. That match saw Colombia fail to launch a single shot on target from inside the penalty box, the only effort on target was Yesica’s long-ranger in the 16th minute.

Germany and Nigeria to fight for third place

In the earlier game of the day, Germany will look to iron its creases for the third-place match against Nigeria. Germany and Nigeria have already met in the group stage, where Germany had won 2-1.
| Photo Credit: FIFA

The team will be without its head coach Friederike Kromp and No. 1 goalkeeper Eva Boetcher, both ruled out with COVID-19.

For Nigeria, this will be a historic fixture – irrespective of the result – because it will be its best-ever performance in the U-17 Women’s World Cup.