From the Indian Women’s Fours team winning a historic gold in lawn bowls to the Indian men’s table tennis team defending its title, here are the top 10 moments from Day 5 of the 2022 Games. Lovely Choubey, Pinki, Nayanmoni Saikia and Rupa Rani Tirkey secured India’s first-ever medal in lawn balls by winning the gold in the Women’s Fours event. The Indian quartet did not have it easy, seeing its 8-2 lead disappear with the South Africans making a comeback to edge ahead 8-10 after 10 ends. Indian then pulled-off a nine-point streak without reply to create history. READ MORE The Indian men’s table tennis team retained its Commonwealth Games title with a convincing 3-1 win over Singapore in the final. It was India’s seventh table tennis gold at the Games since the sport was included in the quadrennial extravaganza in 2002. Sharath Kamal, the 40-year-old veteran, has been involved in each of the five men’s gold medals. READ MORE Vikas Thakur won his third consecutive Commonwealth Games medal when he clinched the silver in the Men’s 96kg category with a total weight of 346kg. He completed a best Snatch attempt of 155kg and a Clean & Jerk of 191kg. Thakur added to his silver in Glasgow 2014 and bronze in Gold Coast 2018. Thakur’s was India’s eighth weightlifting medal at Birmingham 2022. READ MORE

On top of the world 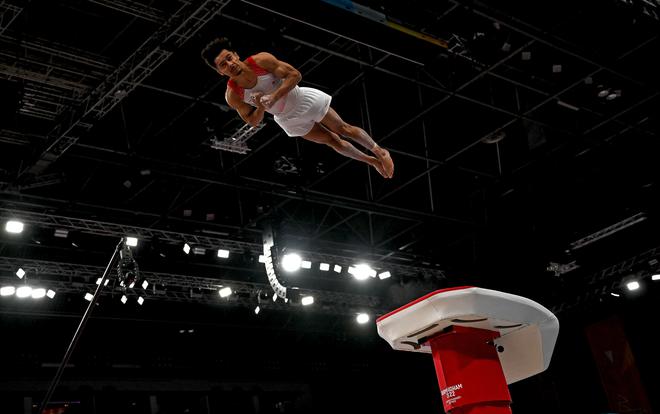 Jake Jarman of England clinched his fourth gold medal at the ongoing Games when he won the men’s vault final with a score of 14.916. Jarman became the most successful English male gymnast at a single edition of the Games, surpassing Max Whitlock, who had won three in 2014. Jarman added to his golds in team, all-round and floor exercise events. After underwhelming at the World Championships, long-jumper M. Sreeshankar announced his arrival in Birmingham with 8.05m that saw him top the qualifying round. It took the 23-year-old just one attempt to secure direct qualification for the final by breaching the 8m-mark. Muhammed Anees Yahiya also qualified for the final, finishing eighth with a 7.68m jump. The Indian mixed badminton team had to settle for silver after Malaysia stunned the overwhelming favourite 3-1 in the final. P.V. Sindhu secured the lone win for India in the tie. Satwiksairaj Rankireddy and Chirag Shetty lost the men’s doubles fixture, Kidambi Srikanth was defeated in his singles match before Treesa Jolly and Gayatri Gopichand went down in their women’s doubles clash. HIGHLIGHTS Eight-time world champion Adam Peaty had the perfect swansong as he added the elusive 50m breaststroke gold to his Commonwealth Games honours list in his final race at the quadrennial event with a timing of 26.76s. The three-time Olympic champion redeemed himself after being stunned in his pet event – the 100m breastroke – by James Wilby.

Grooving to the gold 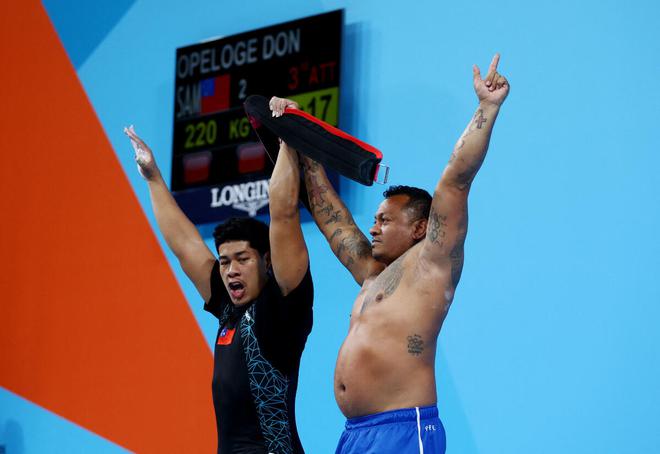 Don Opeloge of Samoa (left) celebrates with his coach after winning the gold in the Men’s 96kg weightlifting final on Tuesday.
| Photo Credit: REUTERS

Samoan weightlifter Don Opeloge was involved in a unique celebration with his shirtless coach after winning the gold in the Men’s 96kg weightlifting event. Opeloge bettered his silver at 2018 Gold Coast with a total weight of 381kg – a Games Record – for the top spot. The Samoan’s brother Niusila and sister Ele are also Commonwealth Games gold medallists. 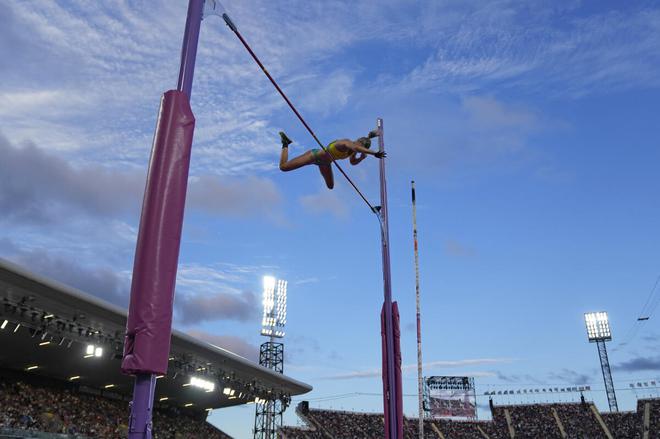 Nina Kennedy of Australia makes a clearance to win the gold medal in the women’s pole vault final on Tuesday.
| Photo Credit: AP

Nina Kennedy of Australia made the most of defending champion Alysha Newman of Canada retiring during the competition to win the Women’s Pole Vault gold with 4.60m. With a gold medal on the line, Kennedy took a gamble by skipping 4.50m and 4.55m – clearing 4.50m would have given her the gold – and attempted 4.60m, which she cleared after one unsuccessful attempt. 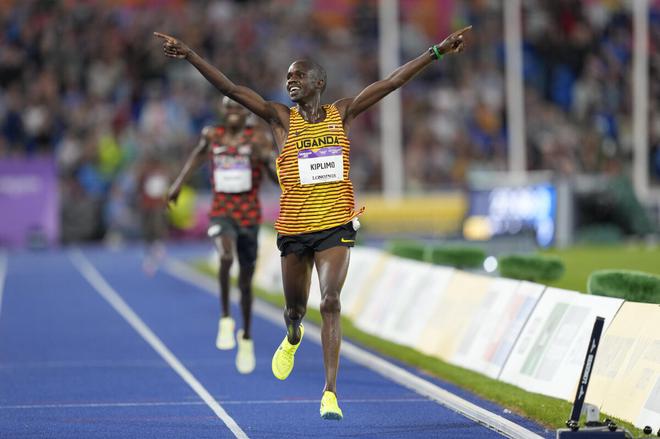 Jacob Kiplimo of Uganda celebrates as he approaches the finish line to win the gold medal in the men’s 10,000m final on Tuesday.
| Photo Credit: AP

Jacob Kiplimo of Uganda finished the Men’s 10,000m final in pole position, with a stunning burst in the last 200 metres of the race, and clinched the gold in 27:09.19s – a Games Record. He edged out second-placed Daniel Ebenyo of Kenya by just over two seconds in a tightly contested affair that saw the top three register their Personal Best.