Reputations stood reinforced in the BWF World badminton championship in Tokyo as most of the elite players lived up to the pre-event billing.

Going by the competition across sections, to find four out of five top seeds winning the gold medal was indeed a surprise. If Viktor Axelsen regained the men’s singles title he had won in 2015, Akane Yamaguchi retained the women’s singles crown. Barring the men’s doubles, the champions emerged as per their seeding.

As it turned out, it was men’s doubles from where India fished out its only medal from the premier competition. Fresh from their exploits in the Thomas Cup and Commonwealth Games, seventh seed Satwiksairaj Rankireddy and Chirag Shetty made it to the semifinals and collected their first World Championship bronze. This also turned out to be India’s lone medal from the championship but ensured that the country’s medal-winning streak, which began in 2011, continued.

With all the leading pairs in the fray, Satwik and Chirag did punch above their weight to make their presence felt. The high-point was the 24-22, 15-21, 21-14 victory over defending champion and second-seed Japanese pair Takoru Hoki and Yugo Kobayashi in the quarterfinals.

Here, the Indians showed some steely nerves during the extended points of the first game. The second game brought out the best in the Japanese before the Indians led throughout the decider to win the match, that lasted 75 minutes.

The following day, the Indians ran into the sixth-seeded Malaysian pair of Aaron Chia and Soh Wooi Yik, the bronze medallist from Tokyo Olympics. In the team championship of the recently-concluded Commonwealth Games, the Malaysians had beaten the Indians for the fifth time in as many encounters. They stretched their domination following a 20-22, 21-18, 21-16 victory in the semifinals lasting 77 minutes.

In the third, Satwik and Chirag led 8-6 but never again. The Malaysians broke away from 11-11 and controlled the rallies much better against the tiring Indians. 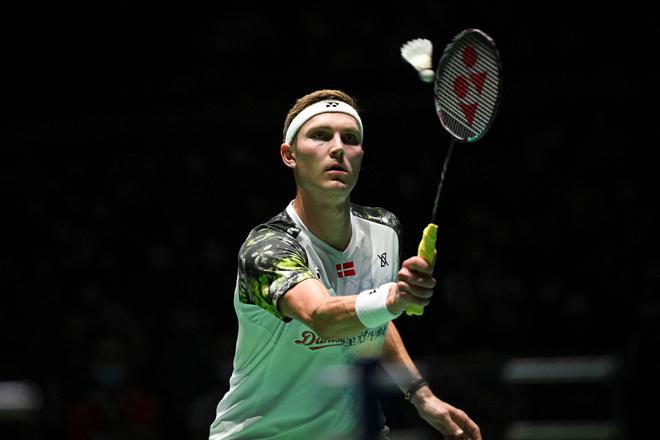 Back with a bang: Viktor Axelsen of Denmark in action against Viditsarn Kunlavut of Thailand during their men’s singles final. Axelsen regained the men’s singles title he had won in 2015.
| Photo Credit: AFP

While the Indians were left holding the consolation bronze — a historic first for India in men’s doubles — the Malaysians rejoiced their gold-winning moment.

In fact, in the Tokyo Olympic Games, Satwik and Chirag failed to get past the league stage after posting a lone victory. Significantly, that triumph in the league came against the eventual champions Yang Lee and Chi-Lin Wang of Chinese Taipei.

No doubt, this Indian pair is scaling new heights and promising more. In addition, the appointment of Denmark’s Mathias Boe as the doubles coach is reflecting in the assurance and confidence displayed by the duo in crunch situations. Boe, along with Carsten Mogensen, was the silver medallist in the 2012 London Olympics. The duo held the World No. 1 rank in 2010.

What difference has Boe brought to the country’s leading pair?

Satwik answers the question, “The thing with him is he is very good at analysing the game and telling us exactly how to work on the mistakes.”

The presence of Boe also helped the unseeded duo of M. R. Arjun and Dhruv Kapila to win three matches to reach the quarterfinals where they met their match against the illustrious Indonesian pair of Mohammad Ahsan and Hendra Setiawan, seeded three.

The high-point of the performances of Arjun-Dhruv was the 21-17, 21-16 victory over eighth-seeded Danish combination of Kim Astrup and Anders Skaarup Rasmussen in the second round.

From the men’s singles, it was H. S. Prannoy who gave the Indians something to be joyous about before falling in the quarterfinals. What gladdened the hearts was the way the 18th-ranked Prannoy took out second seed and two-time World champion Kento Momota, the home favourite.

No doubt, Momota is struggling to regain the form that saw him win a record nine titles in 2019 but Prannoy’s 21-17, 21-16 victory in 54 minutes showed the game the Indian was capable of producing. Having vanquished the former World No. 1, Prannoy carried the confidence against team-mate and ninth seed Lakshya Sen and bounced back to win 17-21, 21-16, 21-17 in 75 minutes. This was the fourth career meeting — all this year — between the two. Lakshya, last year’s bronze medallist, won the first two in the India Open and the German Open. Prannoy returned the favour in the Indonesia Open and repeated the dose in Tokyo. However, Prannoy ran out of steam and ideas toward the business end of his quarterfinals against China’s Zhao Jun Peng, the conqueror of last year’s finalist K. Srikanth. Zhao won 19-21, 21-6, 21-18 after Prannoy survived an injury scare late in the first game.

Though there was nothing exciting for the Indians from women’s doubles and mixed doubles, the absence of an injured P. V. Sindhu, a former champion and a five-time medallist, ensured that even the women’s singles had very little to offer.

IN PHOTOS – Satwik, Chirag and their biggest results till now

At 32, Saina Nehwal is clearly past her prime. Currently ranked 33rd in the world, the former World No. 1 made a valiant attempt to make a statement that she could still compete with the best.

Lucky to be in the same quarter as former World champion Nozomi Okuhara who, like Sindhu, withdrew after her name was included in the draw, Saina gained from the absence of the Japanese by receiving a walkover in the second round.

However, Saina met her match in the third round. Facing Busanan Ongbamrungphan, the 12th seed from Thailand, Saina did well to take the second game to force the decider but looked far from competitive towards the business end of the match. Eventually, Busanan won 21-17, 16-21, 21-13 to end Saina’s hopes of adding a third medal from the championship.

Malvika Bansod, the other Indian in the fray, made a first-round exit in straight games after running into unseeded Line Christophersen of Denmark.