Italy’s Jannik Sinner won his first title of the season with a 6-7 (5), 6-1, 6-1 victory over Spanish teenager Carlos Alcaraz in Umag, Croatia on Sunday.

The 20-year-old Sinner had also beaten Alcaraz in the fourth round at this year’s Wimbledon.

In the summit clash in Umag, top seed Alcaraz and second seed Sinner played a tight first set which had no break of serves. Alcaraz took a 5-1 lead in the tiebreak. Sinner managed to save two set points but Alcaraz, who had won his maiden tour-level title in Umag, converted the third set point at 6-4 to take the opening set.

“That was a crucial point [of the match],” said Sinner in his on-court interview while talking about the six break points saved. “I knew I had to stay there. He made some unforced errors, and I was very happy that I won this game. Then I returned well and raised my level a little bit, and I think I found a solution then.”

Alcaraz again had two chances to bring things back on serve in the following game. Sinner not only kept his advantage but started playing pretty much flawless tennis to take the second and third sets by the same scoreline of 6-1.

For world number 10 Sinner, this is his sixth singles title on tour and first on clay. He also improved his head-to-head record against Alcaraz to 2-1.

Alcaraz lost his second tour-level final in a row. Last week, the teenager had lost to Lorenzo Musetti, Sinner’s compatriot, in the final in Hamburg. Overall, this was the Spaniard’s sixth final this year and despite the loss, he will move to a career-high ranking of four in the latest rankings on Monday.

The 20-year-old Misolic had never played a main draw match at tour level before but it did not stop him from scoring some impressive wins over Pablo Andujar and Yannick Hanfmann on his way to the final.

Australia’s Alex de Minaur too got his sixth career title after beating Jenson Brooksby 6-3, 6-3 in the summit clash in Atlanta. De Minaur had also won the Atlanta Open in 2019.

Marie Bouzkova secured her maiden career singles title at home in Prague with a dominating victory over Anastasia Potapova in the final.

Eighth-seeded Czech Bouzkova beat seventh-seeded Russian Potapova 6-0, 6-3 in just one hour 11 minutes. In fact, Bouzkova lost only 26 games in her five matches and did not drop a set.

The 5th 🇨🇿 Czech to win the title here in Prague

Bouzkova had previously suffered defeats in three finals on the tour. She had recently reached the quarterfinals at Wimbledon, losing to eventual runner-up Ons Jabeur of Tunisia 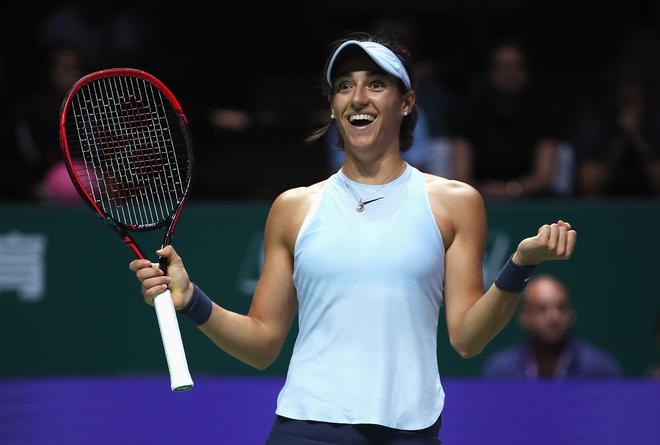 Fifth-seeded Garcia defeated Romania’s Ana Bogdan 6-4, 6-1 in the final to seal her ninth career singles title and second this year.

Garcia’s run to the title included a stunning 6-1, 1-6, 6-4 victory World No. 1 and home favourite Iga Swiatek in the quarterfinal. Top-seeded Swiatek’s record on clay this season before loss to Garcia was 18-0.