Tiny Uruguay, with a population of a mere two million, had majestically won the previous two Olympic football tournaments in Paris and Amsterdam. As first ever World Cup host, it generously paid the travelling expenses of all competitors, though most of the major European sides snubbed the competition. Uruguay duly won this first ever World Cup though it was felt that its Olympic wining sides were stronger.

It found a dazzling new centre forward in Peregrino Anselmo, though injury kept him out of the final in Montevideo. Across the River Plate, Argentina, eternal foe, made its way to play Uruguay in the final which elicited tremendous passions though in the event, the match passed off peacefully.

🇺🇾🏆🙌#OnThisDay in 1930, hosts @Uruguay etched themselves in history as the inaugural winners of the #WorldCuppic.twitter.com/X2LFVCR9f9

Eighty thousand fans in the newly built stadium saw Argentina 2-1 ahead at half-time. Uruguay had taken early lead through Pablo Dorado in the 12th minute before swift winger Carlos Peucelle equalised for Argentina and young centre-forward Guillermo Stabile shot it into the lead. But the second half first brought the equaliser for Uruguay through Pedro Cea before young Santos Iriarte made it 3-2 and right at the end Hector Castro put the host 4-2 ahead with a fearsome drive. 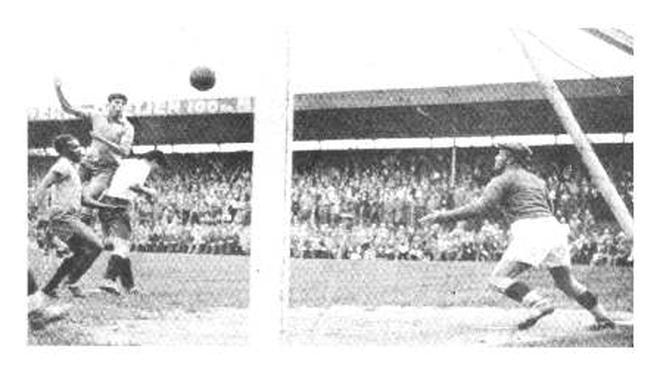 It was a shootout between Brazil and Poland at Starsbourgh on June 5, 1938 in the World Cup. A total of 11 goals were scored.
| Photo Credit: THE HINDU ARCHIVES

Brazil had all the bases covered to become the first side to win the World Cup when it arrived in France, with Leonidas the most prominent star at the tournament.

He scored the first of his 11 goals in a scintillating first-round fixture in Strasbourg’s Meinau Stadium. The game was tied at 4-4 after 90 minutes. However, Leonidas scored two more in extra-time and the Polish side, despite a late goal from Ernest Wilimowski, fell just short and was knocked out of the tournament. Wilimowski, nicknamed ‘Ezi’, had scored four times in the match.

As for Brazil, it progressed to the quarterfinals where it beat the then Czechoslovakia 2-1 in a replay before deciding to rest Leonidas for the semifinal against Italy, confident that it will reach the final and needed Leonidas to be fresh. But the South Americans never made it and in pre-substitute days, the star striker looked on as his team lost 1-2 to the eventual champion.

The 1938 edition turned out to be the last World Cup that used a straight knockout format. It involved 30 minutes of extra-time if the score was level after 90 minutes and if the deadlock could not be broken even after extra half hour, the two side would replay the match. This astonishing game wasn’t even officially the World Cup final since a daft dispensation had divided each round into mini groups. Brazil’s devastating attack had scored 13 goals in its previous two group games and in front of a 2,00,000 crowd at the Maracana in Rio de Janerio, needed only a draw to take the title.

For much of the game, it exerted huge pressure but Uruguay, inspired by its resilient captain and centre half Obdulio Varela with Roque Maspoli super in goal, held out till early in the second half when Friaca scored for Brazil.

However, Uruguay steadily improved with Juan Schiaffino an inventive inside left. In one of Uruguay’s increasing counter attacks, he was unmarked to a Alcides Ghiggia right wing cross and equalised.

Ghiggia himself, served by a persistent Julio Perez who hung on to the ball till he found the former, stunned the vast crowd by striking the winner.

The result is considered one of the biggest upsets in the history of the sport and the match is often referred to as the ‘Maracanazo,’ a Spanish term which roughly means “the blow of Maracana.”

Pele, the 18-year-old prodigy of the 1958 World Cup, leaps before heading in a goal in the final against Sweden.
| Photo Credit: THE HINDU ARCHIVES

It was the virtual apotheosis of the amazing 17-year-old Pele. He had already got a hat-trick in the semifinal but that was against a depleted France.

In this final, Sweden’s little Yorkshire manager, George Raynor, had predicted that if Brazil conceded an early goal, “They’d panic all over the show.”

Well, they did and they didn’t. Nils Liedholm strolled through to put the Swedes ahead. But two glorious runs by the remarkable Brazilian outside right Garrincha demolished Sweden’s left side defence, his crosses making two easy goals for Vava.

After this, the Brazilians dominated the game. Ten minutes into the second half Pele scored a phenomenal goal. Surrounded by defenders, he coolly hooked the ball over his head before pivoting to let it bounce on his thigh and smashing it home.

With defenders Djalma and Nilton Santos subduing Sweden’s wingers Hamrin and Skoglund, Brazil dominated. With Zito and the inventive Didi commanding the midfield, Brazil’s 4-2-4 formation (4-3-3 when Zagalo dropped back from left wing) was in total command.

‘Samba, samba!’ shouted their delighted fans watching as Zagalo beat two men before netting Brazil’s fourth. Liedholm cleverly made a Swedish second goal for Simonsson, but Pele properly had the last word just before full time when he jumped high to head in the final goal. Amarildo (left), the 26-year-old Brazilian forward, replacement for injured Pele, beats Rojas of Chile to the ball during a Brazil attack. Also, in the picture, are Vava of Brazil and Sanchez of Chile. Brazil won 4-2 against Chile in the semifinals on June 13, 1962.
| Photo Credit: THE HINDU ARCHVIES

“We must have the World Cup because we have nothing,” said a defiant Carlos Dittborn, President of the Chilean Football Federation, after his country had been devastated by earthquakes.

The tournament went ahead with Chile reaching the semifinals, winning en route a savagely combative Santiago game against Italy.

Against Chile, Brazil lost Pele who got injured early on. However, Garrincha was too much for it even though towards the end, he was sent off for, at last, retaliating to rough treatment and was hit by a bottle as he went off the pitch.

With Brazil dominant, Garrincha scored twice in the first half, a deadly 20-yard left-footer and a leading header at a corner.

Toro’s mighty free kick gave Chile hope, but Garrincha’s corner was headed in by Vava, who headed Brazil’s fourth after Leonel Sanchez had scored a penalty for Chile.

Surprisingly, Garrincha was amnestied to play in the final.